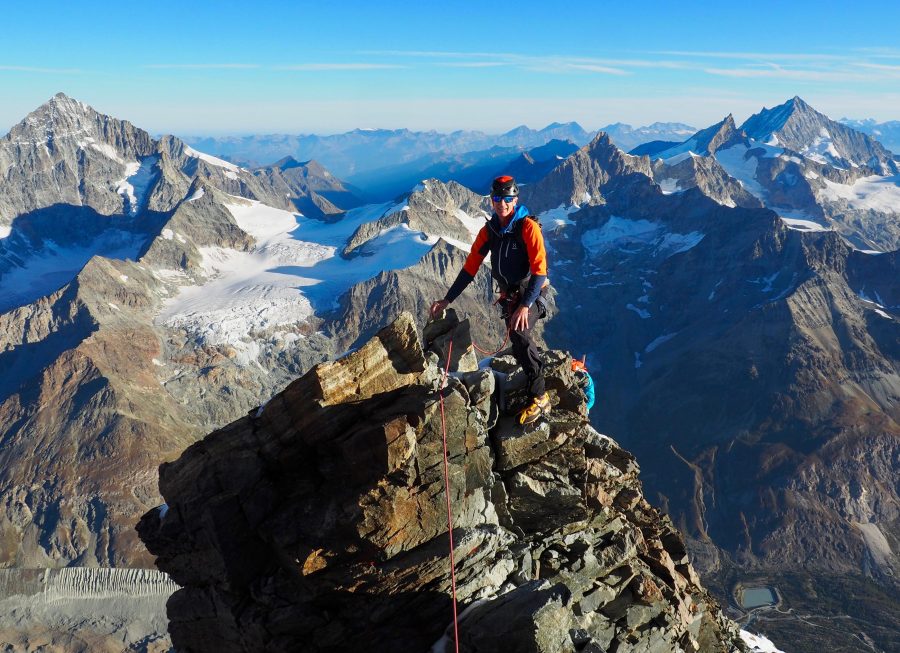 Near perfect late summer weather and conditions prevail on the Matterhorn at the moment and congratulations to Richard on his fine aller retour ascent of the Hornli Ridge yesterday.  This was the impressive culmination of a couple of Matterhorn training courses and his great determination in preparing specifically for the ascent, both physically and technically, including fixed rope training on a tree in the garden.  Chapeau!

Apart from the very occasional patch of snow the lower section of the Hornli Ridge was in ‘normal / summer’ conditions and crampons were not used until the Shoulder with some teams only putting them on at the base of the fixed ropes.  Recent storms had not delivered too much in the way of fresh snow and the temperatures and warm winds remained more ‘late summer’ than autumnal giving very pleasant conditions and a great ambiance in general in a relaxed feeling early autumnal Zermatt Valley.  Gobsmacking views of the surrounding Swiss Valais Giants & Zermatt skyline!

After the initial queue the ‘peleton’ start spreading out with the bobbling torches of the very fast teams with Zermatt Guides well above.  We stayed with a few other guided teams and maintained a steady pace to arrive at the Solvay Hut (4003m) at dawn.  There were a number of folk being choppered of the mountain at that point.  The lower and upper Mosely slabs, below and above this hut, provide the most technical rock climbing on the route and whilst they are not as steep as some of the fixed rope sections, they provide good short pitches of rock climbing at grade III on mainly solid rock.

Above the Solvay there were patches of snow but these were easily negotiated with lots of good dry rock scrambling and even the easy slabs below the Shoulder were climbed without crampons.   From the fixed ropes above the Shoulder however anything easy angled was snowy although the steeper rocks were still sunny and dry.   It was as low as these sections of fixed ropes that the first teams started passing us in descent.  They had summited in less than 3 hours which is impressively swift!   We took a slightly more steady approach and found the new Petzl connect adjust cows tails with Petzl William carabiners useful as they have a wide gate capable of clipping direct in to the thick metal stakes.  This can sometimes mean you are not pinned to the anchor when another team wraps their rope around above yours!

The summit snow fields had a decent narrow crampon track in them and were in good snowy (not icy) condition but still feel steep and exposed!  We used the big metal stanchions to do some pitches on the descent.   The summit ridge was a superb narrow sinuous snow path close to the lightly corniced summit crest and gave a fitting finale to a very satisfying ascent.  4 hours 15 minutes to the summit for us today and 4hrs 45 in descent.   So we did not break any records but kept a good sense of momentum and sure steady climbing up throughout the ascent and descent – with only a couple of shortish breaks on the summit and once on the descent.

Numerous teams were on the Italian summit having presumably climbed from Cervinia / Carrel Hut and a number of these teams traversed the mountain via a descent of the Hornli.  One team were talking about descending on to the East Face – presumably for some kind of base jump / wing suit flight as this is not a good domain for mountaineers in loose summer conditions!  Here is a short clip of Valery Rosov flying down the Matterhorn North Face with the Hornli Ridge on his right during the descent!

That was our last planned ascent of the Matterhorn for this summer season but good conditions remain if folk are going well and interested in a private guiding ascent in the next week or so or to arrange a training programme / guided ascent for summer 2019.

We have spaces on our Snowdonia based Matterhorn training weekend on the 6-7th October in North Wales if you want to kick start your training programme with some great scrambling and big boot rock climbing.

We hope to see you then & good training in the meantime!