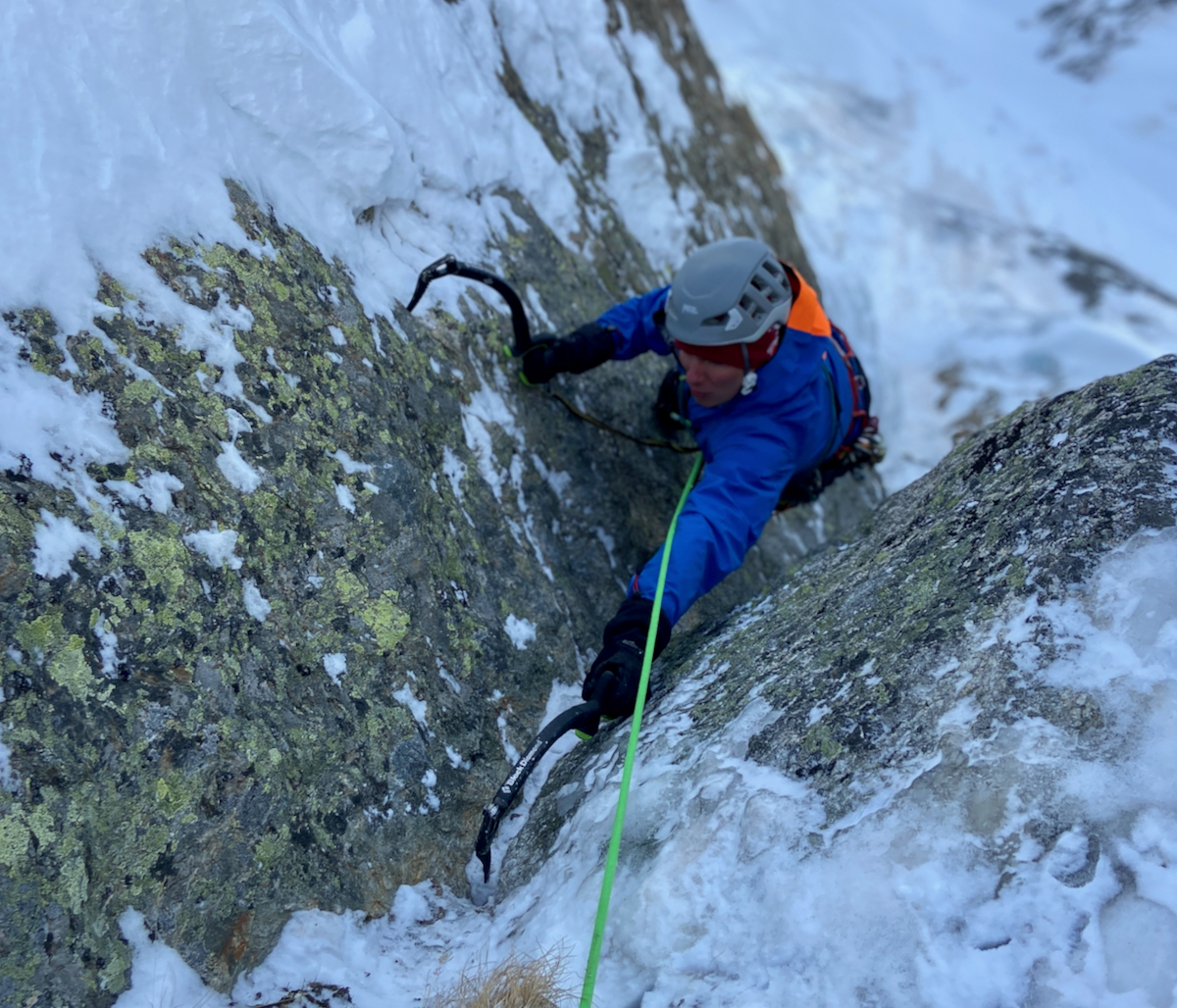 Whilst it was tempting to continue skinning up through the Grands Montets this morning to ski some of the acres of great powder going spare, our heavy bags suggested otherwise.  We swung our hands around to warm them up whilst changing into climbing boots and gearing up to abseil down the Mini Couloir to the base of the fine sustained cliff band of the Rive Gauche.

Despite the proximity of very familiar climbs like Déferlante (plenty of ice and several teams on this) and Mini couloir (older grey ice but complete) it was interesting to explore a new sector of the Rive Gauche with the impressive sustained walls of the Highland Sector stretching out to the right with an apparent air of smoothness to it!

Jeff Mercier in his famous blog suggests not climbing here when it’s plastered in snow, and you can see why.  There are various other good tips for this crag, and the harder Blade Stadium area, on his blog here.  There was an ENSA team climbing the groove to the left of Home Wet Home which had a fine looking initial ice pitch and there was some drilling going on so maybe there are some more bolts now!?

The route breaks down in to 3 logical pitches with an easier angled initial pitch up the broad ice wall and then a more interesting steeper icy groove above to the railings of the little concrete hut!

After that a little traverse past a bolt leads in to the harder upper rocky groove – cave – slabby wall with some good thin moves to access the final snow slope.

There were a number of teams climbing on the Rive Droite also with apparently a new option to abseil from one of the prominent higher trees to get down via a new bolted anchor set up for 60m ropes.

The ski down was superb with wall to wall pristine velvet powder and numerous teams had enjoyed a bigger skin heading right up towards the Grands Montets.

A big team also put in a track over the Col de Passon and reported some good snow on the descent to Le Tour.

Both skiing and climbing conditions are good at the moment and it looks like there is pretty inspiring mix of more snow – cold temperatures – more sunny weather inbound, so please get in touch via the contact form below if we can help with some guiding for Chamonix or Aravis based ice climbing or ski touring…