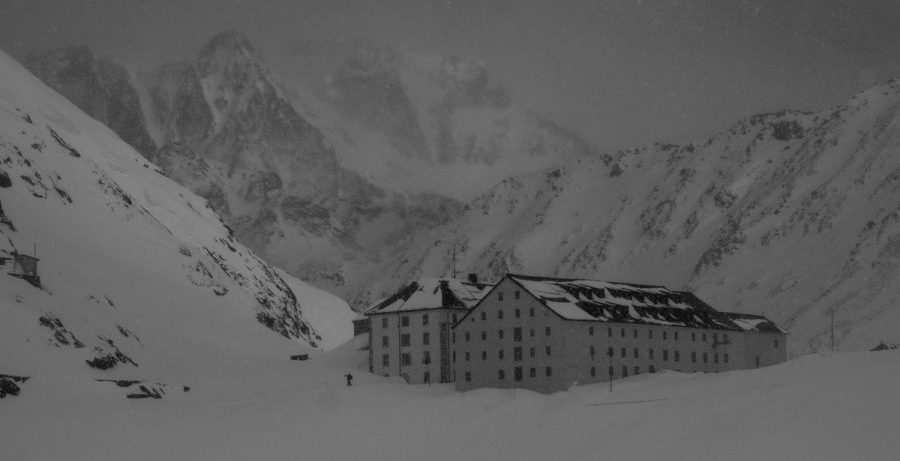 This weeks Chamonix off piste & ski touring course wanted a ski journey going deeper in to the backcountry.  We certainly found that experience around the Grand St Bernard and using the superb Monastery there as a base camp for our couple of days ski touring.   Snow volume seems pretty good and there was plenty of fresh snow too after the storms on Monday, right down to the high car park at Super St. Bernard at 1900m+.

It was quiet in the mountains and we enjoyed plenty of fresh tracks on the Col de Barasson West which was in good condition.  We saw some spontaneous sun triggered avalanches on the slopes on the Italian south side of the Col whilst we were enjoying the views across to Crevacol ski resort, nice fresh tracks on the Col Serena, and further north and west, the burly East face of the Grandes Jorasses.

Teams who had come to the Monastery from Crevacol found nice snow on the descent and decent conditions on the tunnel roof / road as it’s not all banked out.  Likewise the tunnel on the road section near the Grand St Bernard lake is clear and provided an easy passage round to the start of the tour on Mont Fourchon etc.   There were many teams doing Mont Fourchon today and there was some nice turns and fresh tracks to be had after the 12cms of fresh snow overnight at the Monastery.

Unlike on the Italian side of this main alpine ridge, the snow cover seems good, or at least ‘correct’ on the northern Swiss side.   Teams who did the Gran Paradiso in the last few days reported lean cover, plenty of rattly or icy slopes and overall a pretty tough experience!   Likewise the cover is relatively good in Chamonix and the Aravis and it’s about to get a lot better in the next 48 hours with around 70cms of fresh snow falling at 1800m!

We have some remaining places on forthcoming group ski touring days and courses including this weekend….