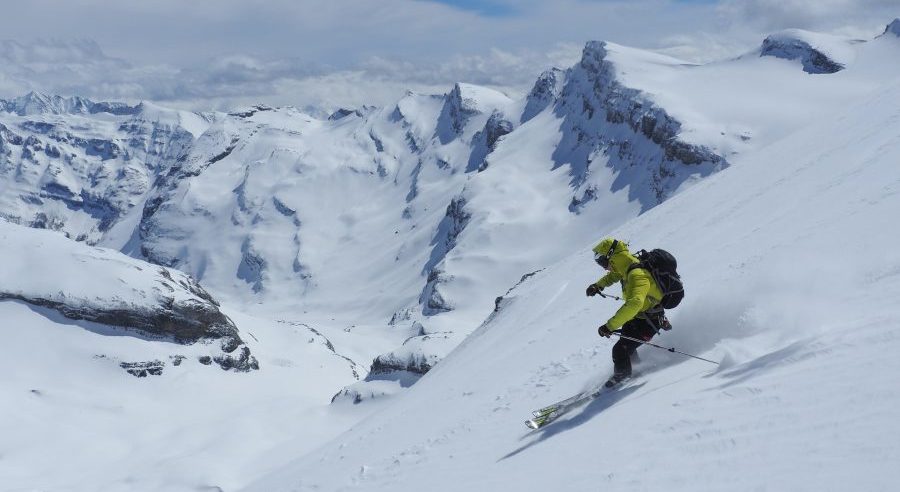 Our plans to complete the tough and classic version of the Chamonix to Zermatt Ski Haute Route via the Grand Lui and Plateau du Couloir were put firmly to bed with a forecast of a week of foehn dominated weather in the Northern Alps.  The forecast was correct and strong Southerly winds with very extensive snowfall over the Val d’Aosta and Italian-Swiss and Italian-French Alpine borders was the feature of the week, creating difficult conditions for touring, and at times, a high avalanche risk, particularly in the Italian Val d’Aosta and Southern Swiss Valais Alps.

We started the week with our planned Ski Mountaineering warm up day from the Grands Montets in Chamonix, but the classic Haute Route was already off the agenda for the week ahead!

As there was so much fresh snow falling, particularly at the South Eastern end of Val d’Aosta, we had a day of powder skiing and touring in the trees above Pila, Aosta.  In the continuing snowfall there was poor visibility but masses of fun fresh tracks in deep light snow which didn’t turn heavy until late afternoon.  A good low level powder day, in mid April, and with remarkable snow volume around the resort of Pila…

After much studying of weather forecasts it appeared that the north side of the Rhone Valley should be spared the worst ravages of the powerful southerly winds which were battering Chamonix, Verbier, Arolla, Zermatt etc and may even get a bit of sunshine!

From a base camp at the excellent Gemmi Pass Hotel we spent the rest of the week exploring this superb section of the West Oberland with the Wildstrubel (3243m) to the west and the Balmhorn (3698m) to the East. To the north it’s possible to ski out towards Kandersteg and there are great views down the valley towards the lakes around Interlaken.  However, the big views are to the South and it was impressive to see the full effects of the Foehn battering the Swiss Italian frontier with masses of fresh snow falling and plenty of cloud and wind during the week.

The snow volume in the West Oberland, like most of the Alps, is seriously impressive at the moment, with perhaps the highest snow levels for 15 years / since 2003.   We enjoyed ascents of both the Schwarzhorn and Daubenhorn on the first day and got a mixture of powder, spring and plenty of crust on the north facing descent of the latter!  However, on Wednesday night, the snow made it across the Rhone and there was some fun sections of shallow wind blown powder for touring on the Wildstrubel…

As well as the shallow sections of powder on the descent of the Wildstrubel, there was some good spring snow lower down and the fine steep short couloir next to the Lammeren Hut provided an enjoyable low altitude sunny contrast to the windy powder high up.

With a good weather forecast for the next day, and some good acclimatisation now complete, a pre-dawn start saw us skating across the frozen Daubensee Lake (2207m) and past the smart Schwarenback Berg Hotel to start   the fine ski mountaineering ascent of the Balmhorn (3698m).   After an atmospheric and physical skinning journey up the Schwarz Glacier this leads to the steep West Face which we climbed with crampons and skis on the packs.

There is a superb panoramic view from the summit, particularly to the giants of the Swiss Valais across the Rhone Valley and this only heightens the atmosphere of this being a classic tough ski mountaineering peak in the Northern Alps.  The descent of the West Face is steep and whilst the snow was grippy, it was firm and exposed and we joined a team from Sion in traversing (side slipping!) the NW ridge to access the more transformed snow on the South Face below the col between the Balmhorn and Altels.  This was indeed softer and more transformed, but still steep!

This SW face joins the W face near the obvious bits of exposed ice on the glacier and there still remains a long and sustained steep slope to access the lower valley and lovely cruisy easier skiing down to the alp and snow track leading back to Schwarenbach.  Other teams had skied the fine NW face of Altels (3629m) although had not done the mountaineering ground to reach the summit, and many teams skied the equally very fine NW face of the Rinderhorn (3448m) via lots of fine steep variations.

We thought the West Face of the Balmhorn was quite steep, but the East Face is another matter altogether and check out this short film of Remy Lecluse making a ski descent of it here.

Our last day in the West Oberland provided Hetty andTom an opportunity to plan and complete their own excellent varied day of ski touring, enjoying the skiing on both the East facing slopes off the Roter Totz (2848m) in the morning and West facing slopes below the Plattenhorner and above Daubensee lake in the early afternoon.  It was noticeably warmer today, 4C at 2000m, and we finished earlier and celebrated a great week of touring with yet another Apfelschorle at the Gemmi Pass before returning to Chamonix….where the foehn was still blowing!

Back in Chamonix, teams have been struggling to complete high altitude objectives like Ski Mont Blanc, due to the strong foehn winds and remaining winter snow. Some better conditions have been found in the Aiguilles Rouges with some remaining powder on higher sheltered north facing slopes and still good cover and fun skiing on the descent of the Berade Valley.

Our Chamonix Off Piste & Mountain Skills courses had a good week despite the tough spring conditions and that competes those courses for 2018 with the 2019 ski course dates here.

Our only remaining Ski Mountaineering course left for this season is our physically tough Spring Ski Summits course which will be attempting to ski both the Rimpfischorn and Dom between 17-21 May 2018.