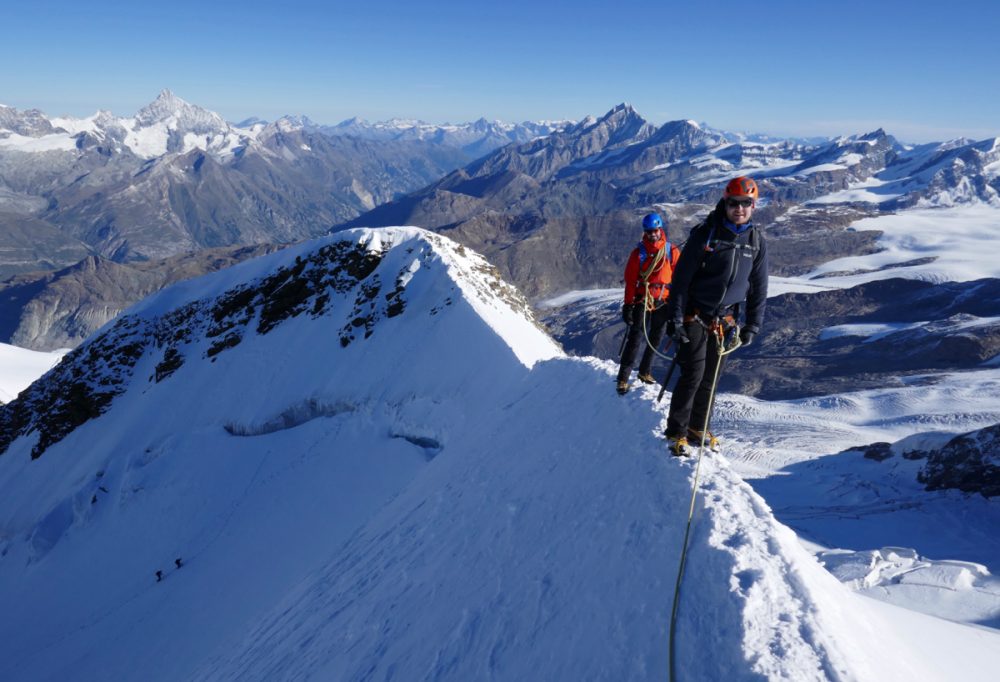 Significant recent snowfall in the high mountains combined with great early autumnal weather and cooler and quieter mountains gave us some some very enjoyable ascents above Zermatt & Saas Fee over the last 4 days.  Yesterday we climbed the brilliant, and big, Nadelhorn with the classic steep and scrambly approach direct from Saas Fee to the lovely Mischabel Hut, which has now closed, as planned, for the season.  Conditions remain pretty good with dry rock to the glacier and then a good track across the glacier and up the NE Ridge.

Numerous teams were climbing this classic big Saas 4000m peak but there was no-one climbing the Lenspitze & traverse to Nadelhorn which were both still looking well snowy.  There was a track across to the Stecknadelhorn but no track was seen further along the Nadelgrat.   Several teams could be seen climbing the normal route on the Dom which had a good looking track up the north face although the hut is also about to close and reports said lots of fresh snow on the north side and icy conditions on the Festigrat.  Also no water at the hut!

We also saw head torches bobbling their way up the SW ridge on the Tasch from the Mischabeljoch Bivvi Hut and there was also a track above Langfluh heading up towards the Alphubel or Alphubeljoch, which looked pretty crevassed!

In the couple of days before this ascent, so the conditions info is now several days old, we made really enjoyable ascents of Pollux from Zermatt and Castor from the Rifugio Ayas.  Whilst the glacier journey from Kleinne Matterhorn to Pollux and down to Ayas is well crevassed, and now slightly hidden, the fresh snow had made the snow conditions good.  We climbed the SW ridge of Pollux entirely in crampons with snowy scrambling lower down, dry rock on the steeper fixed chain sections and a good snowy track on the upper ridge to the summit.

The glacier descent to Rifugio Ayas has plenty of holes around the track and a micro convoluted section near the hut.  The hospitality and food at the hut was excellent as were the views across to not only Gran Paradiso but also the glow of city lights from Torino.  A great overnight base camp and launch pad for Castor next morning.

Good steady progress was made back up through the holey glacier, which also has some serac debris around the track.  There was plenty of fresh snow blown in to recent tracks and a team of 3 young Brits made a great job of trail breaking a long way up to the bergschrund below the mini headwall leading up to the summit ridge.  There are a couple of steeper sections on this ascent with ice not far below the snow and some teams were placing the odd ice screw both on this longer ascent and the short and steeper headwall to reach the fine narrow snow crest, see uppermost photo.

This summit ridge had great stiff snow for cramponing but calls for neat footwork and a steady head as the exposure is significant.   Many more teams were coming up from Rifugio Quintino Sella and reported good conditions on this independent approach.

No track was seen on the traverse of Liskamm although there was a track heading round to the nose on Liskamm and over to Rifugio Gnifetti.  On the return to Kleinne Matterhorn a track could be seen to access the half traverse of the Western peaks on the Breithorn but there was no track on the full traverse and the rocky bastion on the Breithorn still looked quite snowy.  Word from the street on Zermatt was that the Zermatt Guides had re-started guiding the Hornli Ridge & conditions were good, but that the Hornli Hut was on the point of closing for the season.

As part of our transition from Zermatt to Saas Fee we also nipped up the Gornergrat Railway and made the short and enjoyable traverse of the Rifflehorn (2930m) starting via Rotenboden and, after the traverse, descending to Riffelberg.  We added a short steep direct pitch of rock climbing en route to the summit and descended via the steep fixed rope on the West Ridge thus giving not only a highly enjoyable and extremely scenic short alpine rock route, but also a great Matterhorn training climb!

We are heading back to Zermatt later this week so stay tuned for another conditions update later this week and please let us know if you have any conditions info from mountains not mentioned here.  We also have teams on the Weissmies & Mont Blanc so there will be up to date info on conditions there too.

We only have 2 group mountaineering courses left for this ‘summer’ alpine season, Gran Paradiso & Mont Blanc, but already have some Weissmeiss & Mont Blanc courses booked in and running for summer 2020 as well as our series of inspiring and fun Matterhorn & Mont Blanc training weekends in Snowdonia & The Scottish Highlands, details here: