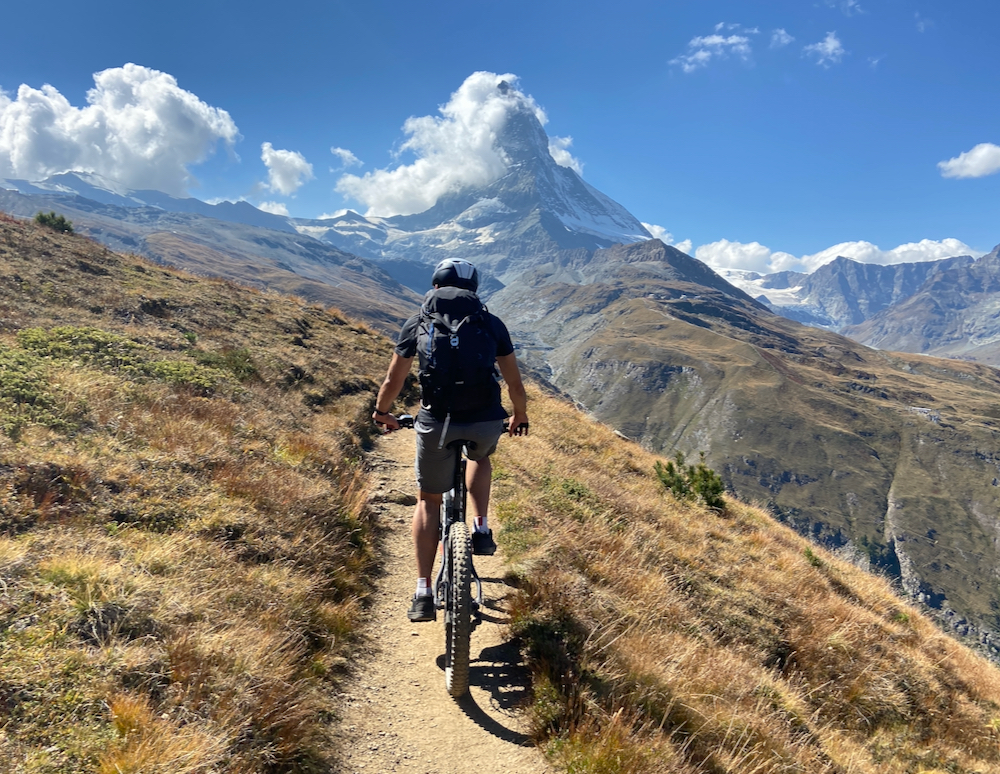 Ok, If we said we climbed the Matterhorn by bike, it would be something of an exaggeration!…I don’t think even Scott could carry one of those outrageously heavy e. mountain bikes up the Hornli Ridge although we did do some fairly eccentric e.bike carrying training on our ‘warm up’ day!

But using an e.VTT (Velo Tout Terrain / Mountain Bike) to approach the Hörnli Hut early on the morning of the ascent certainly changed the character of a more normal ascent from the classic Hornli bunfight departure….and saved on the eye watering hut fees too!

So, at 0345 we were cycling up an unsurprisingly deserted Zermatt high street and en route for the enjoyable and rapid ascent to near Schwarzsee…thanks to ‘Turbo Mode’ and a very powerful bike battery!   A beautiful starry night and rising sliver of an orange crescent moon created an inspiring ambience to start the day and quite a contrast to the normal mountain hut approach and this was only enhanced by a badger boffling across the track and 2 shooting stars.

Another highlight of this stye of approach to begin the ascent of the Hörnli Ridge was both seeing the crocodile of bobbling head torches setting off, led by the Zermatt Guides as always, and then being out of step with all other teams on the mountain and not catching any other teams until above the Solvay Hut.

The recent warm weather had returned the ridge in to good classic summer conditions and we made rapid progress up the rocky lower Hornli section, well above the Solvay hut and put crampons on at the base of the snow slope leading to the shoulder, where again there is a good track and pleasant conditions.

For mid-week in mid-September in the Covid summer of 2020 the ridge was relatively busy with around 30 teams at the Hornli Hut and probably around two thirds of those going to the summit from the Swiss side.   The Carrel Hut was also full and it’s worth noting that the Cervinia Guides now require reservations for the Carrel Hut even though you still need to take your own food and water.   Good dry conditions were reported on the Italian side with numerous teams making the traverse of the Matterhorn via an ascent of the Lion Ridge and descent of the Hörnli.

The upper snow field on the Hörnli had a decent track in but were a bit icy in places and we climbed the steeper sections in short pitches between the big metal stanchions in both ascent and descent.   Inevitably this is one of the more tiring sections as you approach nearly 4500m and there is the meeting of numerous teams both in ascent and descent….including one without crampons!

The final snow ridge had a pleasant stiff snowy track and we savoured the last few steps to the summit.  Zermatt looked, and felt, like a long way below…and our departure already felt like a couple of days ago!

Sometimes climbers say that the summit is only halfway there, but on the Matterhorn it can feel like less than halfway with the descent often taking longer than the climb.   However with teams being much more spread out on the mountain now and continuing mild pleasant weather, we took our time and started enjoying the scrambling again lower down.

After a welcome pit stop at the Hörnli Hut it was great to know that we had the bikes waiting for the final section of the descent back to Zermatt and we even enjoyed some of the idyllic Hobbit mountain bike trails above Stafel and then again below Furi as a brilliant way to finish a memorable day on the hill.

Our warm up day had been pretty good too!  Often this is just the short walk to Hörnli Hut from Schwarzsee but we took the opportunity of having hired our e. Mountain bikes for 2 days to both sample some of the brilliant trails and do some acclimatisation whilst rock climbing on the South Face of the Riffelhorn.

The Hornli Hut is about to close for the year and it’s likely the next major storm to hit the mountain will mean that classic summer conditions will not return again until next summer, often in July.  So, if you are keen to make the ascent of the Matterhorn in 2021, with or without e.bike approach, now is a great time to start training and we offer UK based Matterhorn training weekends over the autumn, winter and spring which build up nicely to our summer alpine programme where both our Weissmies, Dufourspitze and Chamonix mountaineering courses give a brilliant foundation on which to build alpine skills suitable for an ascent of the Matterhorn.

Please get in touch to discuss your training & ascent programme and we hope to climb and train with you soon, Rob.