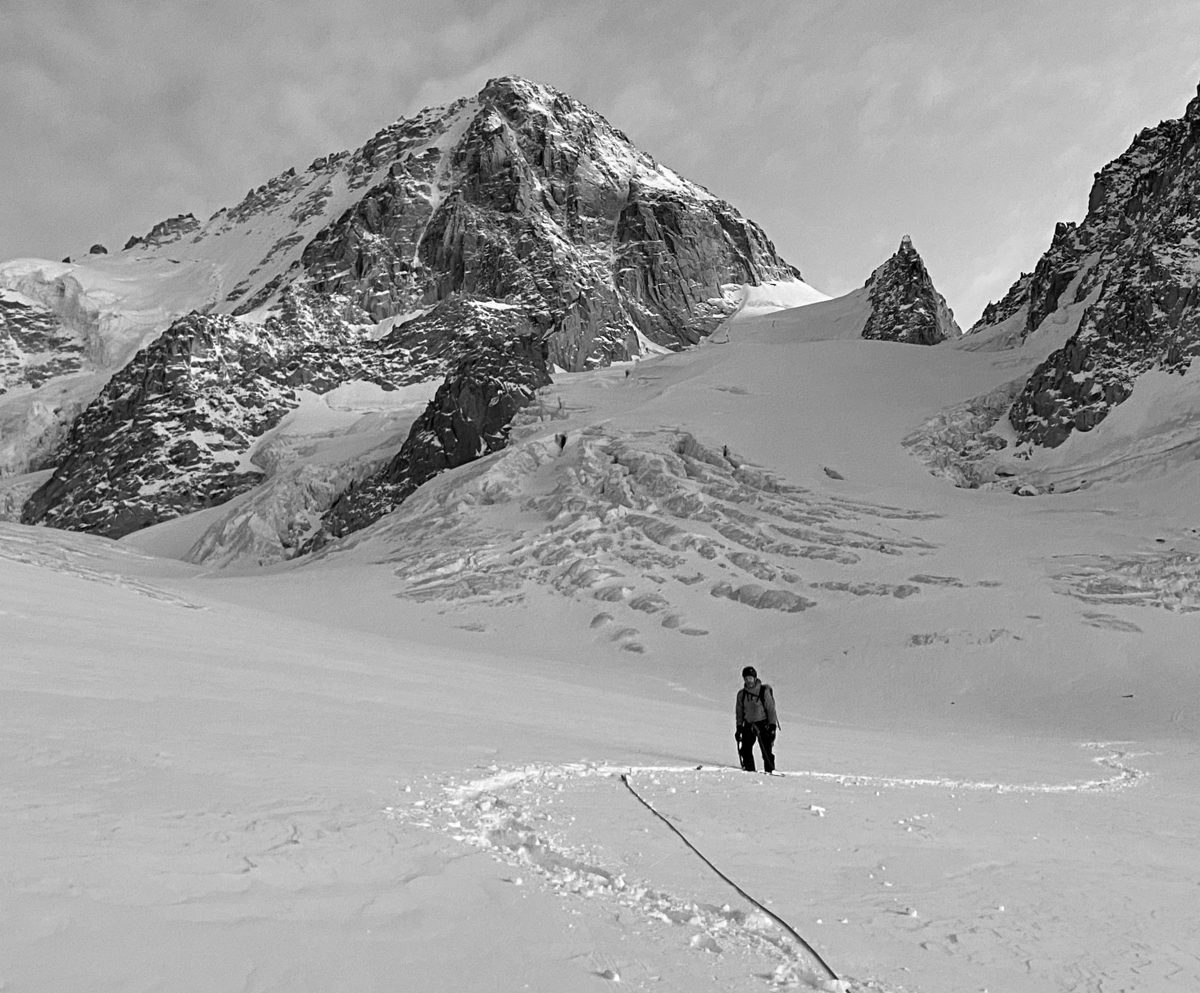 Whilst November is one of the quietest months of the year in the Mont Blanc Massif, with pretty much all the lifts and huts closed, it can also be one of the best months for mixed climbing in the mountains.

Our approach day was characterised by the very strong foehn winds spilling over from the Italian side of the Mont Blanc Massif.  Le ‘Retour de l’Est’ was in full swing and the high ski resorts in Val d’Aosta and Savoie were getting big snow fall volumes.  There had been little to zero fresh snow in the Chamonix Valley in recent days but the strong winds had covered most tracks and given the mountains a pristine but also harsh and raw late autumn feel.

With no other teams around in this very popular area, even the ascent to the Col du Tour felt like a special journey and we appreciated emerging from the shade to a surprise sunny picnic at the Col whilst we checked out conditions on the North Face of the Tête Blanche.

Heading back in to the shade on the Swiss Trient side of the mountain we thoroughly enjoyed the short climb up the snowy – icy – mixed north face of the Tête Blanche which gave some fun climbing and great north face training and acclimatisation for a much bigger route the next day.

After enjoying the sun again on the summit we took the long way back to the hut so we could check out the track into the base of the North Face of the Aiguille du Chardonnet.   See conditions topo photos below for the snow ice on the Chardonnet, Argentiere, Courtes, Droites, Verte and a very dry looking Table Couloir on the Aiguille du Tour.

Our reconnaissance of the approach to the north face, and moreover the existing trail from Carrie and partner that day, enabled a stress free approach to the base of the NW face of the Chardonnet in 3 hours.  There are however plenty of crevasses in evidence and a steep traverse and very open slot crossing as part of the route, but it all passes fine at the moment and there were another 3 teams heading up that way today.

Presumably due to global warming there is now some extra mixed climbing at the base of the Escarra route which is pretty fun steady snowed up rock mainly with good gear.  We did this in 3 short pitches before moving together up to the base of the fine ice runnel.

Whilst the ice pitch is billed as the crux of the route, in current conditions it was easier than the mixed pitches below with a very enjoyable easy angled ramp leading up into a steep wall finalé, all with good placements and short ice screws.

After the ice pitch we moved together up the 150m runnel to the fine notch col which marks the junction with the upper slopes of the Aureille-Feutren Gully.

Above the col there just remains the final 60 degree gully in a superb exposed position at the top of the face – climbed with tiring calves but plenty of screws and rock gear.

Despite the gathering clouds and unforecast snow flurries, the skies cleared for our arrival on the summit and it was good to thaw out and enjoy topo like views across to the big north faces of the Argentiere Basin.

Thanks to Will and Luke for putting a great track and some new anchors on the descent which was pretty snowy with plenty of down climbing and numerous more abseils than I’ve done previously including an interesting alternative descent down the hard R bank of the glacier at the end to reach the start of the route.

Despite the lateness of the hour and the 2000m of descent still to do…we lingered and enjoyed the wonderful late autumn late afternoon light on the Tour Glacier before plunging down in to the darkness, valley fog and brutally steep path back down to Le Tour….

That’s a wrap for our autumn alpine guiding season but please get in touch if you would like to do some mountaineering in Chamonix over the remainder of the year with some good conditions in the mountains and the cascade ice climbing season usually starting in December.

Our winter 2022 ski courses are now taking bookings including our popular Chamonix Off Piste & Touring Skills courses running from Jan to April, so please get in touch if you would like to join us for one of those.