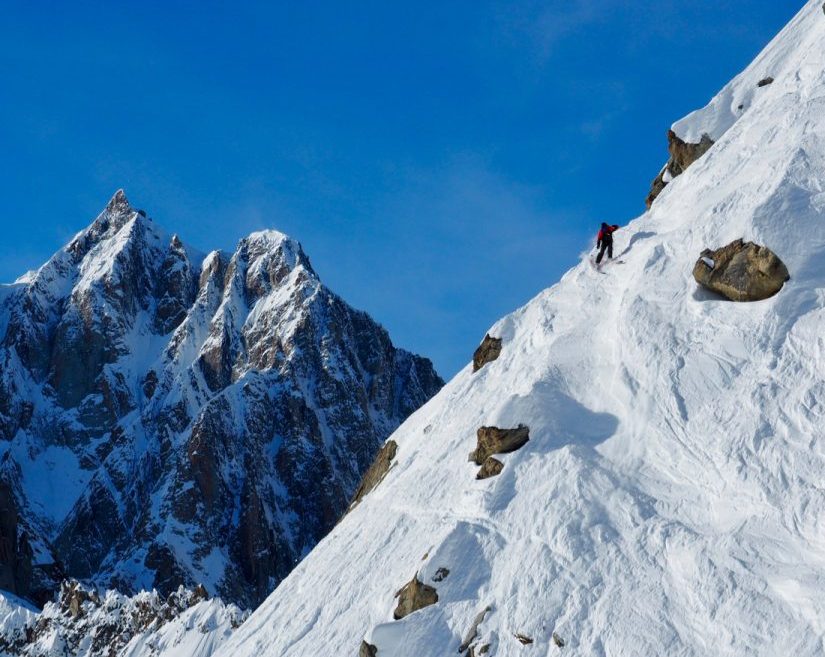 The weather forecast promised a ‘bluebird’ day and no one at the Skyway Monte Bianco was disappointed with the superb sunny & calm high mountain weather.   The early winter temperatures were chilly in the morning, keeping  the thick fresh snow in good light condition, although it did warm up on sunny slopes in the afternoon.   Many teams were out enjoying the lift accessed skiing with only a few heading off further afield.  A few teams skied the Marbrees Couloir from the Col Rochefort and some others had taken a steeper direct line from the Aiguilles Marbrees ridge.

Very few teams headed across the Vallée Blanche and the French side looked deserted thanks to the Aiguille du Midi lift being closed!   One team were seen touring across towards the Col de Gros Rognon and then, later, ski tracks on the Gros Rognon variation to the Vallée Blanche.   The ski was fresh & cool and generally pleasant to ski and just had a light surface wind effect away from the Cols.

Most teams however stayed around the Skyway station with lots of steep lines being skied, and then repeated then more laps done, then even a few bumps on the approach!  The Cable Face under the Skyway top section looked particularly popular with lots of teams taking various exits. 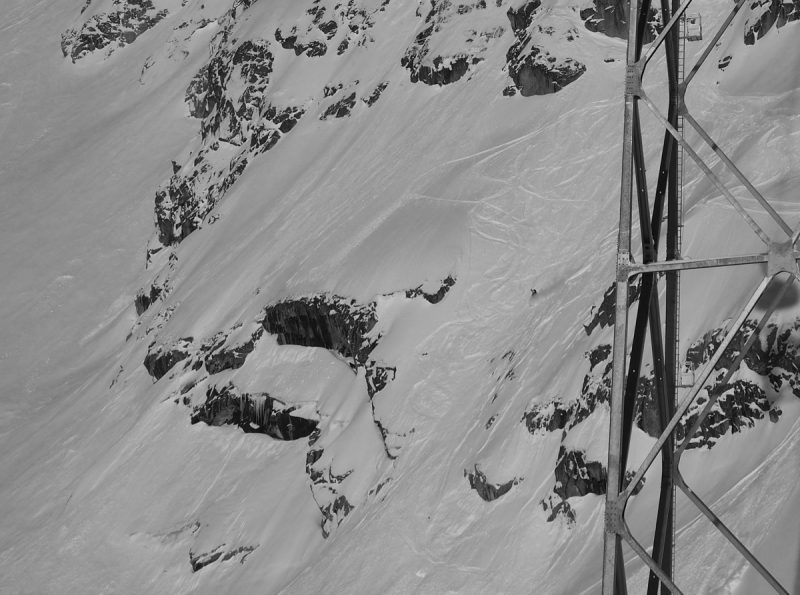 The last pitch exiting the cable face to join the easier skiing down to Pavillon, the Skyway Mid station.  Teams also skied the gullies beneath the old Rifugio Torino – to join the Toule Glacier and the gully under the Skyway metal walkway to the glacier had also been skied.    There were lots of tracks on the Toule Glacier.  The snow looked good and there is apparently a very helpful long new section of staircase making the access to the glacier much easier, with some decent ledges cut too!

Teams had also skied one of the steep couloirs leading down in to the valley below the hanging glacier next to the Cable Face and various skiers with ‘wings’!  / speed riders skied in to this direct from the Skyway station.  A few teams also continued down into the valley floor below the mid station, which looked good at the mid station but was probably a bit thin lower down!

We enjoyed a fine glacier journey across the Col du Geant and over to the Col Rochefort for a quick picnic in the sun!  Snow shoes were used and teams without looked like they were working hard!  There were a couple of teams also heading up to the summit of the Aiguilles Marbrees.

Lots of teams were also enjoying the fresh snow and good turns at the Grands Montets…with plenty of folk skinning over the back on various different touring options.  This will be a feature of this winter in the Chamonix Valley with the Grands Montets telecabine closed for the whole of the winter.  Most of the Ski Evasion area is still closed and opening this weekend but there were some fun turns, good pistes and shallow fresh tracks off piste from the Mont d’Arbois summit lifts at St. Gervais.

It looks like there is plenty more precipitation on the way over the rest of the week albeit with a relatively high rain snow limit for the time of year.   This should further improve the early season snow volume in the middle and high mountains but may strip back some of the very lean snow cover existing at low altitudes.