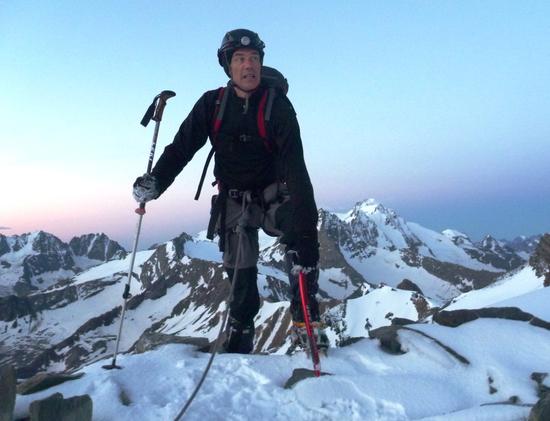 Great day for our large team on the Gran Paradiso yesterday with all 19 reaching the summit and completing an enjoyable traverse from Chabod to Vittorio Emanuelle Huts. Conditions are now becoming typical of recent late summer time with extensive crevassing on the Chabod glacier and some exposed ice on the Vittorio Emanuelle Route. There was an excellent overnight freeze, snow conditions were fine and the bridges and crevasses of the Chabod route all safely negotiated with minimum difficulty. In softer snow or with more melting this would probably require a re-routeing of the track to create a better route.

There was a well tracked descent to Vittorio Emanuelle although icy sections were encountered albeit dealt with in a straight forward manner – with good cramponing! Some teams were climbing the lower rocky shoulder between the 2 routes although the upper ridge of that also looked quite icy.

On other peaks, the Tresenta was totally dry and had been climbed albeit in rather loose rocky conditions. Ciaforon and Paradiso North Faces were both well icy and unappealing with much loose rock exposed on the former. The Grivola looked very dry and it would be good to know if the approach couloir and glacier have reasonable snow conditions as these combined with dry conditions on the face would present perhaps the most straightforward conditions for an ascent.

The Matterhorn was also in good fast condition yesterday although will of course not benefit from the fresh snow arriving tomorrow. Our Eiger team this week climbed the Dent du Geant in good conditions, although beware the loose rocky approach, but will not be climbing the Eiger for a while now probably after the snow tomorrow. They also climbed the fine rock route ‘La ballade des gens heureux’ (6a) and continued along the traverse of Les Perrons, above Vallorcine.