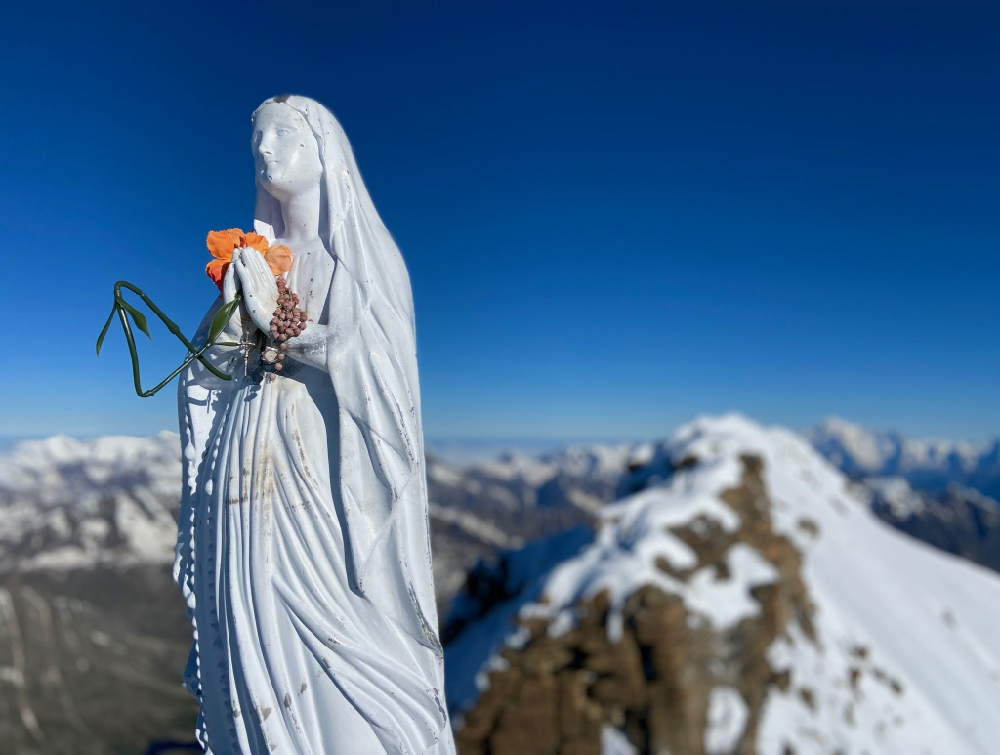 The upper Valsavarenche had a magical mid summers dawn this morning and, despite the early start, no head torch was required for the steep march up through the Larch forests to the Rifugio Vittorio Emanuelle.  There was a post breakfast lull at the hut and there was no need to stop as the going was good and, thanks to a light pack and uninterrupted climb, only 50 minutes had passed.

We have had a number of enquiries about doing a mountain running (mainly walking!) style ascent of both Gran Paradiso and Mont Blanc so this was a test of an alternative method which avoids using any huts and goes from the valley early with relatively light gear and a determined approach to maintain momentum and keep any transitions to a minimum using mountain running style packs with hydration systems and gel / snack pouches.

This style gives a great feeling of rapid progress with minimal faff and a lighter load.  A lighter pack means more commitment but early summer season conditions are currently good with lots of snow from just above the Hut boulder fields and then all the way up the valley to the glacier and onwards to the summit slopes.  Nice stiff refrozen snow with a generally good track from the sunny weekend with both Chabod and Vittorio Emanuelle Huts now open.

Most Guides will tell you, it’s a rare pleasure to have the whole of the upper mountain to yourself, and great to avoid the queues which can form on the summit ridge.  This was still pretty snowy with only the last few steps being on rock and leading to a deserted summit, apart from the Madonna of course!  There was a track coming over the summit ridge from the North Face which was in good condition and climbed today.

Despite almost no actual running the summit was reached in about 2hrs 35mins which is a good advert for determined walking and minimal faff as an alternative to a hut night and another good option for climbing the mountain.  More running on the descent and some nice smooth snow slopes meant the Pont – Summit – Pont aller retour was done in just under 4 hours and it was good to back in Pont for cappuccino o clock at the café!

The café in Pont is now open…and also has a new 1 way system!  The proprietor looked pretty pleased to welcome customers and, for those with an interest in the good cafés of the upper Val d’Aosta, the fine Piler Centrale in Morgex is also now open again.

Including water and snacks, pack weight on this ascent was well under 5kgs which felt pretty good compared to a more normal heftier alpinists packs.  More details on our Mountain Running Kit List.  If you would like to make a 1 day ascent of Gran Paradiso and / or Mont Blanc then please get in touch, via the form at the base of this page, to discuss creating an inspiring bespoke programme.

The good weather and decent early summer snow conditions have meant lots of teams have been enjoying some good alpine routes around the Mont Blanc Massif including plenty of routes done from Skyway Monte Bianco like the Tour Ronde (via various routes), Aiguille d’Entreves and Kuffner Arete.  More details on the Rifugio Torino Facebook page here.

Lots of activity also on the North side of the Mont Blanc Massif with teams climbing on the Triangle du Tacul, North Face of the Midi and various other sectors now with more refuges opening up and good early summer snow conditions.  Please get in touch via the form at the base of this page if you would like to arrange some private guiding in Chamonix for the end of June and summer 2020.