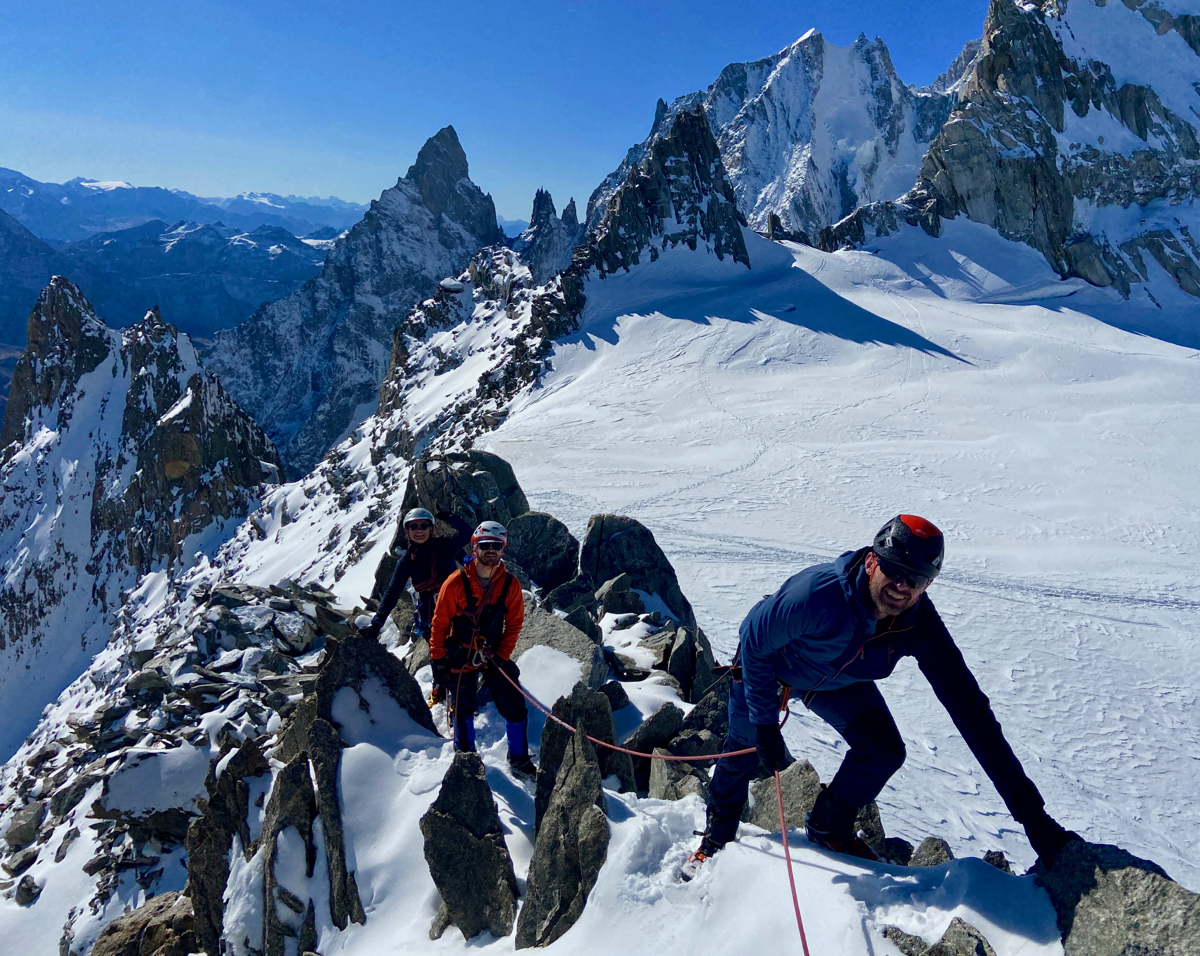 Despite the recent almost continuous good weather in the mountains, last weeks dump of fresh snow had not gone unnoticed by various teams of skiers and there were some fine tracks and nice turns in velvet powder snow on both the Italian and French side of the Vallée Blanche.

It was a beautiful calm sunny autumn day in the high mountains with very little wind but plenty of fresh snow resting as creamy cool powder on the north facing slopes accessed from Skyway Monte Bianco.  The Aiguille du Midi also re-opened today and a few skiers put turns in the upper Vallée Blanche before skinning back to the Midi.

Whilst the autumn powder is pretty appealing, the autumn crevasses are ever present, or, worse, superficially covered with a shallow covering of light powder snow.  There were a few man sized holes on the journey to the Col d’Entreves and great care is required with early season (pre-season!?) glacier skiing for this reason.

There were some steeper tracks on the north face of the Aiguille du Toule as well as teams going up the snowy normal route on the East flank from the Col du Toule.  There were also numerous teams climbing various modern mixed routes on the Grand Flambeau although conditions looked quite dry in general still.   There are reports of better conditions on some of the icy goulottes above the Vallée Blanche and, with the Midi being open, reports of teams climbing Vent du Dragon as well as Beyond Good & Evil and Carrington Rouse from the Plan de l’Aiguille.

Our Mont Blanc training course team enjoyed the mint snow conditions for some crampon training and then the glacier journey round to the Col d’Entreves.  There were teams on skis – teams on snow shoes – teams on foot.  All worked fine but there are some significant holes in the track along the way.  So being on a rope felt like the right option!

Teams have been climbing the North Face of the Tour Ronde in recent weeks as well as the Rebufat & Gervasutti Couloirs and whilst the previous normal route looks a right mess thanks to glacier recession there was a track on the Col Freshfield approach which again looks steeper than it used to be when the glacier was higher.

There was 1 team heading up on to the summit of the Aiguille d’Entreves itself having completed the technical section of the traverse with pleasant snowy conditions on the approach scramble from Col d’Entreves.  There was no visible track at the other end of the traverse although perhaps this team put one in!

Other teams had traversed the Aiguilles Marbrees from Col Rochefort and down the normal abseils on the Torino side.  The Skyway and Torino Hut remain open for another week and the Midi is now open until the 7th Nov apparently so there could be some pleasant mountain conditions with the continuing good weather.

That’s a wrap on our open Mont Blanc training courses for this year but we do have plenty more on the calendar for 2022 in Chamonix, Snowdonia and the Scottish Highlands.  Please get in touch for more details if you are keen to start training for next years Mont Blanc or Matterhorn trip.

If you would like to join us on Mont Blanc in 2022, our course dates are now online and include various options for the acclimatisation & training peaks as well as the option to try the adventurous autumn expedition as per this trip.  In the meantime:

Our winter 2022 ski courses are now taking bookings with our January Chamonix Off Piste & Touring Skills course full but we may run a 2nd group and there are numerous other dates so please get in touch if you would like to join us for one of those.