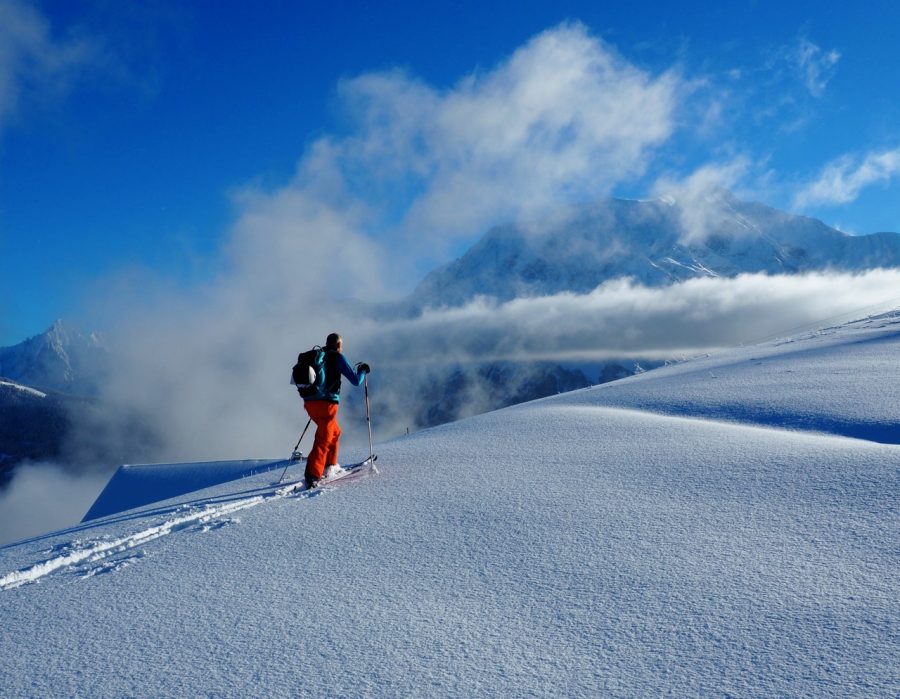 Some lovely turns in deep light snow above Cordon this morning with beautiful winter hoar crystals on the surface after a cold night.  Great snow at around 1500m on Easterly aspects and getting thin lower down with very shallow snow and no base below about 1300m.  The resort of Cordon is working on their pistes to get them open for next weekend whereas in the Evasion & Chamonix areas, many lifts are opening tomorrow.

The pistes at Courmayeur continue to be in reasonable condition in the cold weather despite little recent fresh snow.   Teams from the Skyway Monte Bianco have been doing laps on the Cables face and various other runs from Punta Hellbronner.   After a cold & bright day in the Northern Alps on Saturday it looks like a warmer but wetter day on Sunday with significant precipitation as snow above between 800m & 1600m – see Meteo Blue Chamonix forecast here.  Bon Weekend.

After 3 days of very wet and cool weather in the Arve Valley, the curtain was lifted today revealing a superb panorama of winter mountains with a thick blanket of fresh snow….

There has been up to around 1 metre of fresh snow above 2000m and there was good cover lower down with nice skiing all the way to the car at 1400m today.   The snow was fresh and light and a pleasure to ski.  Lots of teams were out enjoying the pleasant touring conditions.

This major snowfall over the last 4 days has completely changed the snow conditions situation in the Northern Alps as we approach opening weekend for the restors of Evasion and the Chamonix Valley.   There is now nearly half a metre of fresh snow at 1500m but with little / no base and up to around 2m at 2500m with a better base but more wind effects higher up.

Likewise there were some fun turns in deep fresh snow to be had at the Eastern end of the Chamonix Valley with many teams touring from Le Tour.  Further East again, over the Swiss border, teams enjoyed reasonable early season touring conditions on Mont Rogneux via the Brunet Hut and the Col de Barasson near the Grand St Bernard Monastery.

The early season snow pack remains delicate and with very significant snow fall over the weekend, this has only increased with numerous areas in the Alps experiencing ‘High’ avalanche risk category.   Snow & ski conditions around the Mont Blanc and Aravis Massif look set to continue to improve slightly this week with some good cool sunny weather and snow showers over the weekend again.

Alerts have been sent out today regarding an elevated avalanche risk in Haute Savoie due to the very high amounts of precipitation which has fallen in the last couple of days, over half a metre at altitudes above 2500m according to the Meteo France avalanche bulletin.  Unfortunately much of this has been rain at lower altitudes due to the mild temperatures but it will be a significant event for building snow conditions on the higher glaciers and slopes.  Lower down, below 2000m snow cover remains poor or even non existent on south facing slopes.

There are currently predictions of VERY SIGNIFICANT SNOW FALL IN THE NORTHERN ALPS THIS WEEKEND! This should further augment the high altitude snow pack but crucially with plummeting temperatures this should also see significant snow fall even at low / valley altitudes across the northern Alps.

The ski resort of Courmayeur opened at the weekend but the combination of big queues for limited piste skiing and generally poor off piste was not a classic by all accounts!  Better conditions were found by those going higher via the also recently opened Skyway Monte Bianco and teams found plenty of fresh tracks at high altitude both in the high glacier bowls above the Vallée Blanche and on the south facing Toule Glacier, albeit very early season conditions on the latter!

In Chamonix the planned lift opening dates are as follows.

The early season snow cover is better on the South side of Mont Blanc and down Val d’Aosta and than on the North side in the Chamonix Valley and Aravis at the moment.  So whilst the resorts of La Thuile, Pila and Courmayeur open this weekend, Cervinia has good cover up high and is already in full swing.  We skied from the lower resort of Valtournenche (1524m) and liased with Cervinia via the high Colle Sup Cime Blanche (2982m).
The pistes of both resorts were in very good condition with endless wide, groomed and practically empty runs, all the way down to resort level for Cervinia, and downloading via the lift from Salette (2245m) to Valtournenche.  We enjoyed some high altitude training in the form of pasta & tiramisu eating at the Rifugio Guide Del Cervino, which is open as a mountain hut through the winter as well as a skiers café.  At 3480m this provides a good base camp for  high altitude acclimatisation, ski access to the Plateau Rosa and the ascent of the Breithorn (4165m), although a super early start is not really required for that at the moment!
Whilst the pistes were excellent today, the visibility and crusty snow at middle altitudes was not good for off piste skiing.  There was some nice shallow fresh snow higher up but the visibility was too poor to enjoy it today.  Overall pretty impressive cover up high for the end of November and a little more on the way on Sunday.
Bon Ski Weekend

On the South side of the Mont Blanc range and down Val d’Aosta, around 20cms of snow fell at 2000m on Friday and into Saturday morning.   This further topped up the reasonable early season base up high and turned the hills white down to 1000m.  Val d’Aosta looked stunning when the sun came out on Saturday and there were teams ski touring from near Planaval above Morgex up towards the Col Fetita and Col Bard.

Very good early season conditions were reported from Cervinia with teams enjoying fine groomed pistes, some off piste and even ski touring to 4000m on the Breithorn.  The ski resort of Pila plans to open on December 1st, same for La Thuile, and it looks impressively snowy already. Check out the webcams here.

There have already been numerous early season avalanches, particularly in the Southern French Alps, and you can keep an eye on these via the useful Data Avalanche website.

There was a lot less snow in Chamonix and on the north side of Mont Blanc and you can keep an eye on the evolving snow conditions and avalanche risk on the Meteo France website.

The build up to this winter season has been characterised by lots of good sunny weather but equally some pretty significant snow falls in the hills, particularly in the South Eastern Val d’Aosta and Southern French Alps as is often the case in late autumn.
The October storms that came up Val d’Aosta and saw numerous teams floundering and retreating from the Gran Paradiso have resulted in decent very early winter ski conditions in Cervinia as well as a decent start for some of the high southern French resorts like Tignes.
Zermatt had snow to town level at one point and whilst this all went in the recent warm weather, there is significant early season snow up high and various teams have been out touring on the Breithorn and starting the ski rando training on the long ascents from Cervinia etc. 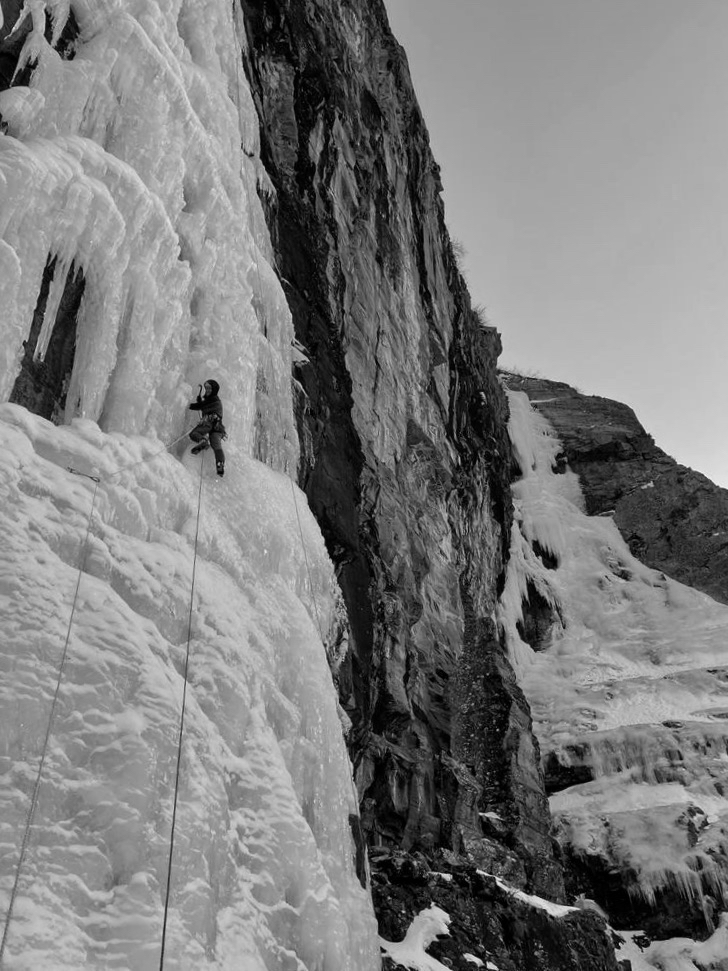 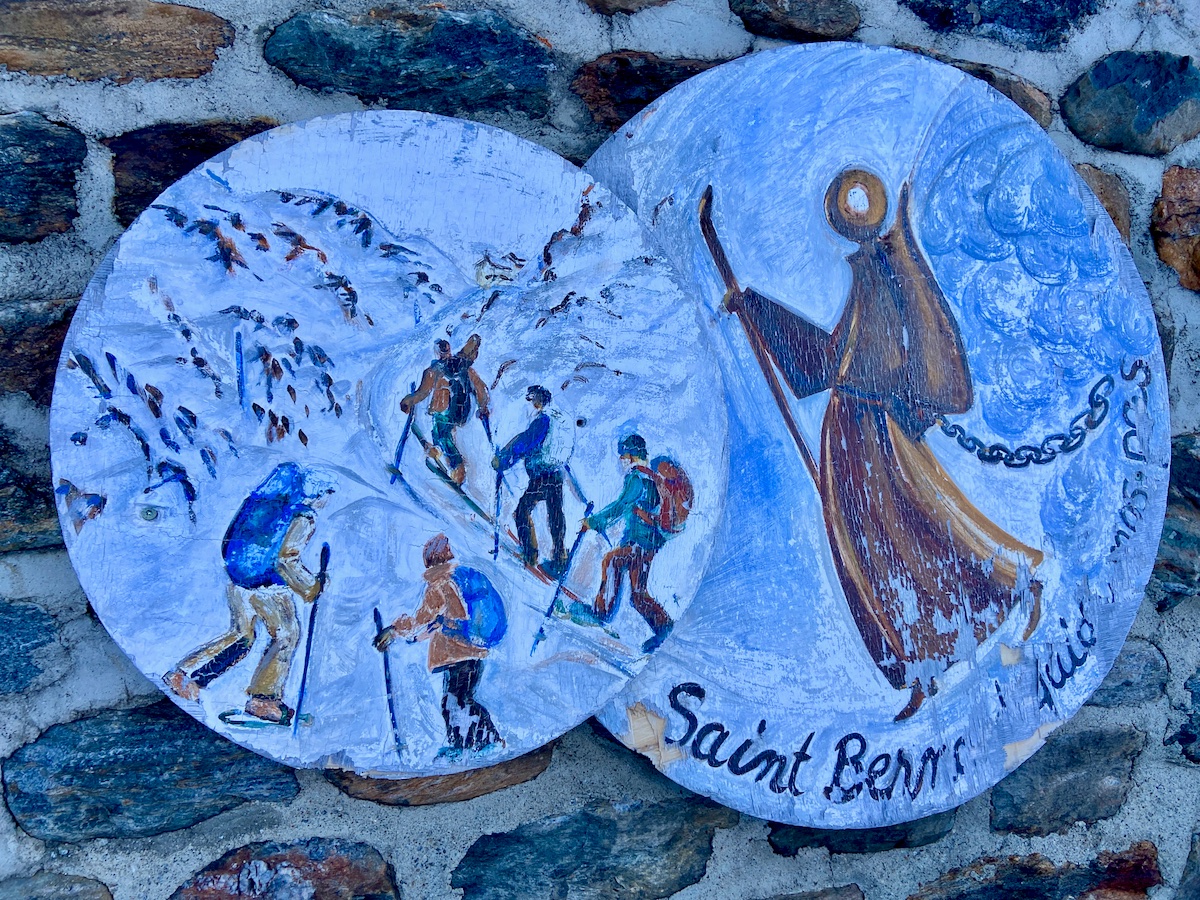