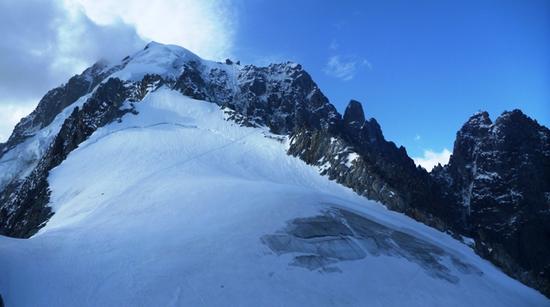 Few snowy high alpine places have been spared the effects of the triple whammy of a poor winter snow volume, quite dry spring and very hot early summer. The Grands Montets is no different and late summer conditions prevail already with low snow volume and much exposed loose rock. There was some enjoyable front pointing training up the lower easy angled ice wall (the right hand side of this is exposed to rock fall from the messy Voie Normale route above).

Numerous teams were climbing the West Ridge ‘integrale’ which adds the lower loose rocky section to join the Voie normale higher up and does avoid the now messy normal approach to the ridge from the glacier. The low snow volume has left numerous large loose looking rocks sitting exposed in the icy slopes. We enjoyed a very short but fairly steep few moves of ice climbing through the bergschrund on the lookers left of the North Face. The snow conditions on the face above were quite good with steady climbing and the odd screw leading to the upper crescent snow col and mixed ground above leading to the summit.

Most teams were doing a traverse route up the West Ridge and down the North Ridge via a mix of abseils, down climbing and a bit of negotiating of loose rock and soft snow on the lower descent back to the station. A few teams were also heading off down the Glacier des Rognons, down towards the NE ridge and beyond.