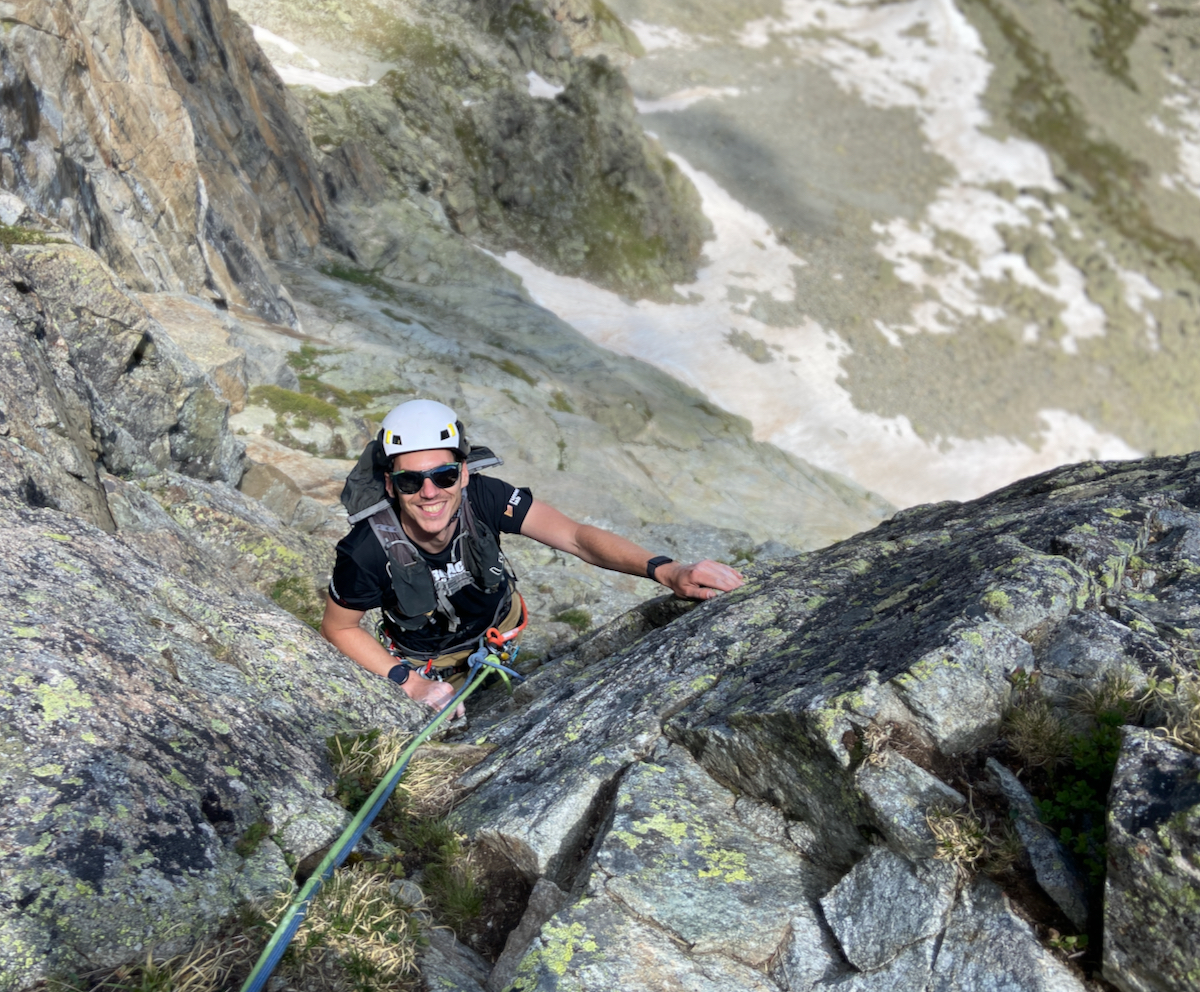 The Emosson Dam café has some of the best roadside views going of the Chamonix North Face club.  The traverse of the barrage marks the start of another adventure on Les Perrons above Chatelard, on the French Swiss border at the far Eastern end of the Mont Blanc Massif.

The walk in to the South face is intricate but logical, with great views, but mainly it’s pretty physical!  Bram is a strong trail runner and we expect to knock a bit of the guide book time…but not so much under the 1hr 45 today.

Things were slowed down a bit with the remaining stiff snow at the base of the crag and we used crampons and axe to approach the base of the route – and set up a trad anchor in the bergschrund!

The trad gear came in pretty handy along much of the route…except for the steep section of the crux route, the bolts are generally few and far between!

There is some good rock and a few nice slab sections on the first few pitches but also a bit of rambling..albeit pretty bold rambling!   But this bold slab journey takes the route into the base of the steeper wall country where things change for the steeper and better protected with the crux 6b pitch.

After an easy but bold approach to the big corner, there are some technical moves up the lower wall, with more closely spaced bolts now, before a fine soaring rising traverse in a steep position but with good holds.  The 6a pitch above also gives some fine wall climbing leading to the base of a very fine looking smooth and sustained slab.

This very fine sustained slab pitch is really the jewel of the route and, whilst still not exactly a clip up, does have a few more bolts than other pitches allowing the moves to be savoured a bit more!

From the belay at the top of this slab, the summit feels close, but there is still a fine steep 6a pillar to negotiate before the summit of the Grand Perron, 2673m can be reached with great views both behind to the melting ice sheets in the turquiose green reservoirs and with a big sweep of the main northern alpine arc on the other side, with Mont Blanc to the West, Grand Combin in the middle and Matterhorn to the East.

If we thought the guide book time for the walk wasn’t hanging about, that was nothing compared to the 3 hours for the route.  It’s fair to say it took us a bit longer than that!  But as the topo suggests, the climbing is very bold on many of the easy sections and, whilst the climbing is steady and rock good, it feels pretty run out and not the place to be rushing!

The abseils ran very smooth and the only notable event was the superb spectacle of massive soaring vultures overhead.  We had the route to ourselves today and the only sounds were the occasional drifting chatter of climbers above on the traverse of the Perrons (plenty of snow still on the approach and descent) and Chamois knocking rocks down the loose slopes to the side of the crag.

We have availability for private guiding in Chamonix in early July and still for most periods over the summer season.  Likewise in Snowdonia and Scottish Highlands for Mont Blanc and Matterhorn training programmes.  For group courses, we have available spaces on the following courses which are  already running plus you can check our full list of courses here. 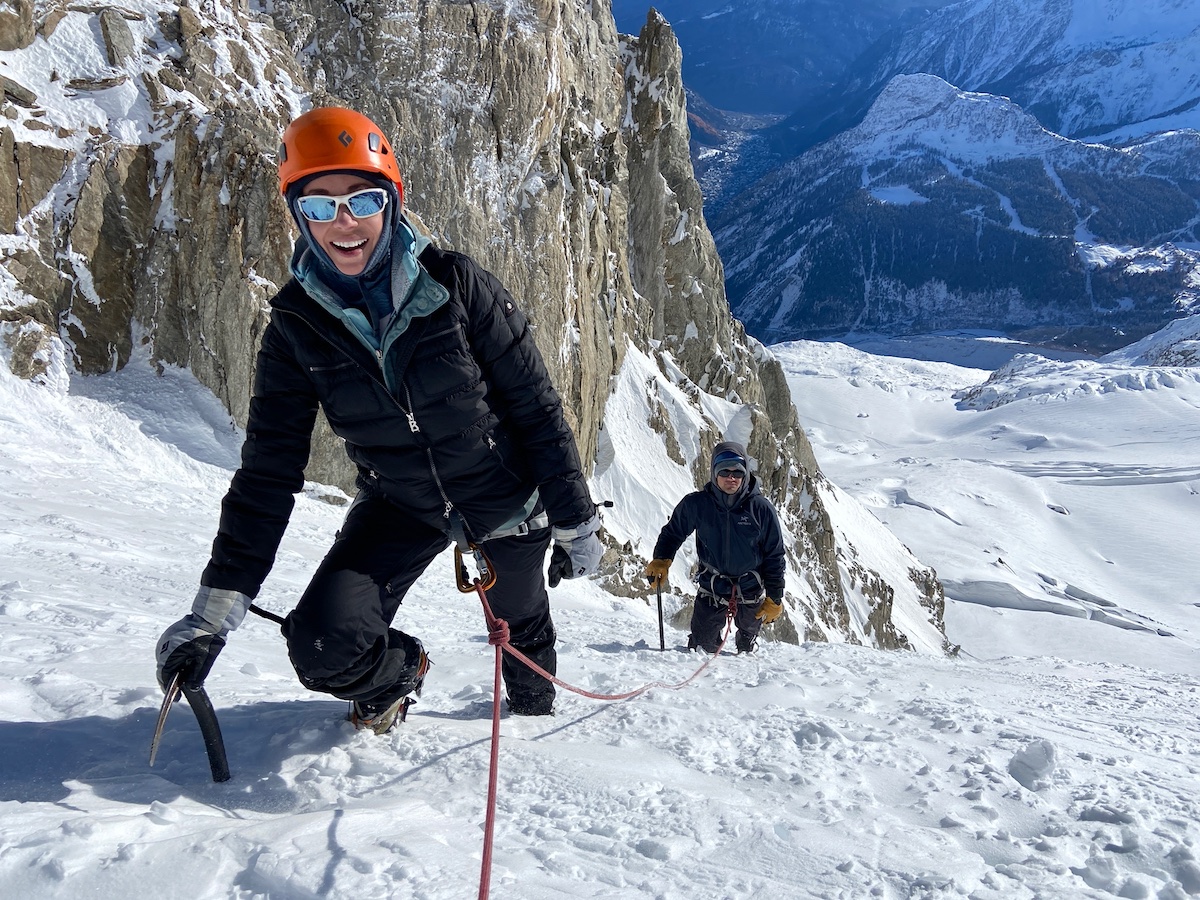 High Mountain Guides · Dec 5, 2022 @ 5:42
@High_Mt_Guides
The ice 🪓 have been dusted off and 🧊is forming in the hills. Get in touch for some early season winter #climbing, cascades and training for bigger projects later in the winter:
https://t.co/eOET7s8dIM https://t.co/9j8mAdXWsR
View on Twitter 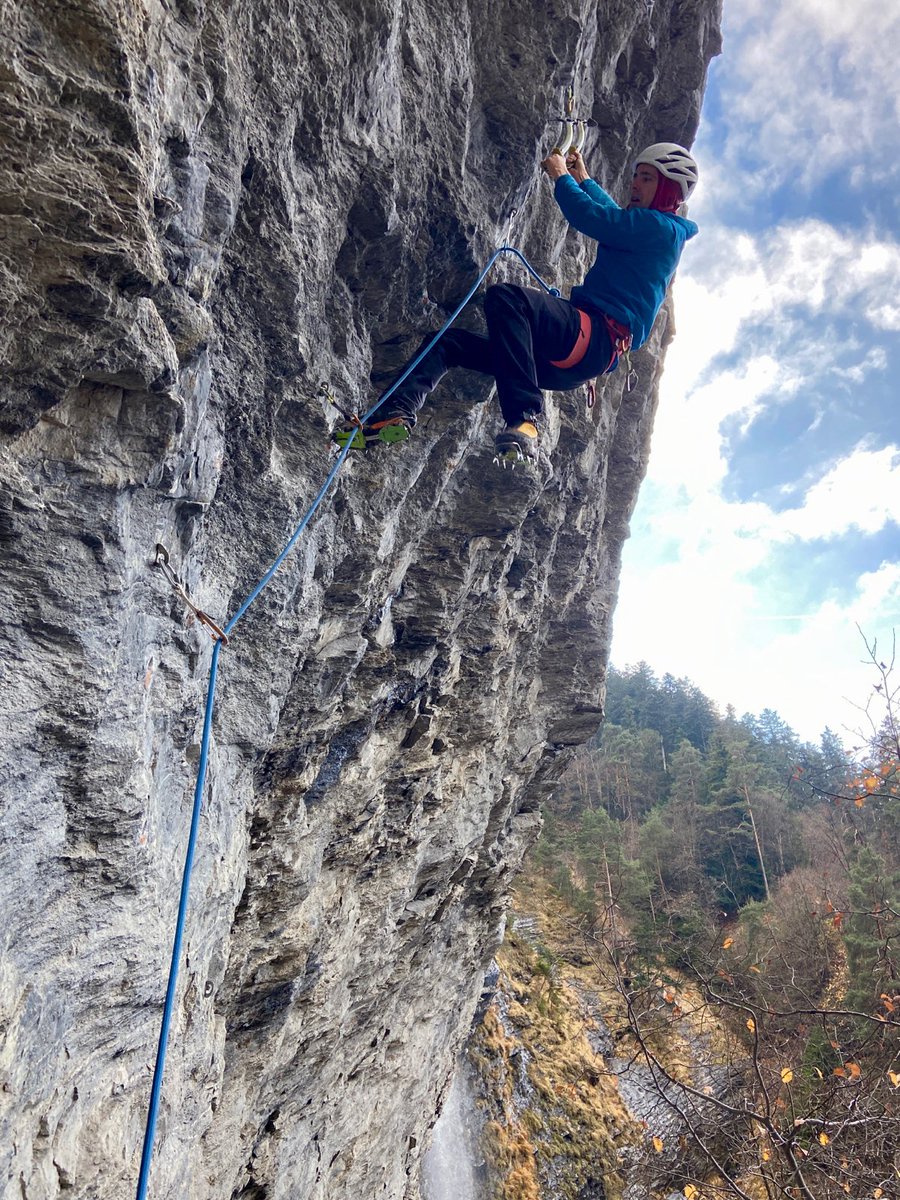 High Mountain Guides · Dec 5, 2022 @ 5:36
@High_Mt_Guides
The trip all our guides want to do! A good team forming for our mid-winter (18-19 Feb) #ski touring weekend in the beautiful Val Feret🇮🇹with base camp at Rifugio Bonatti...the best hut in the Alps? Check the details & join the team here:
https://t.co/V1jOVUk50o https://t.co/xRUX6nwcY0
View on Twitter 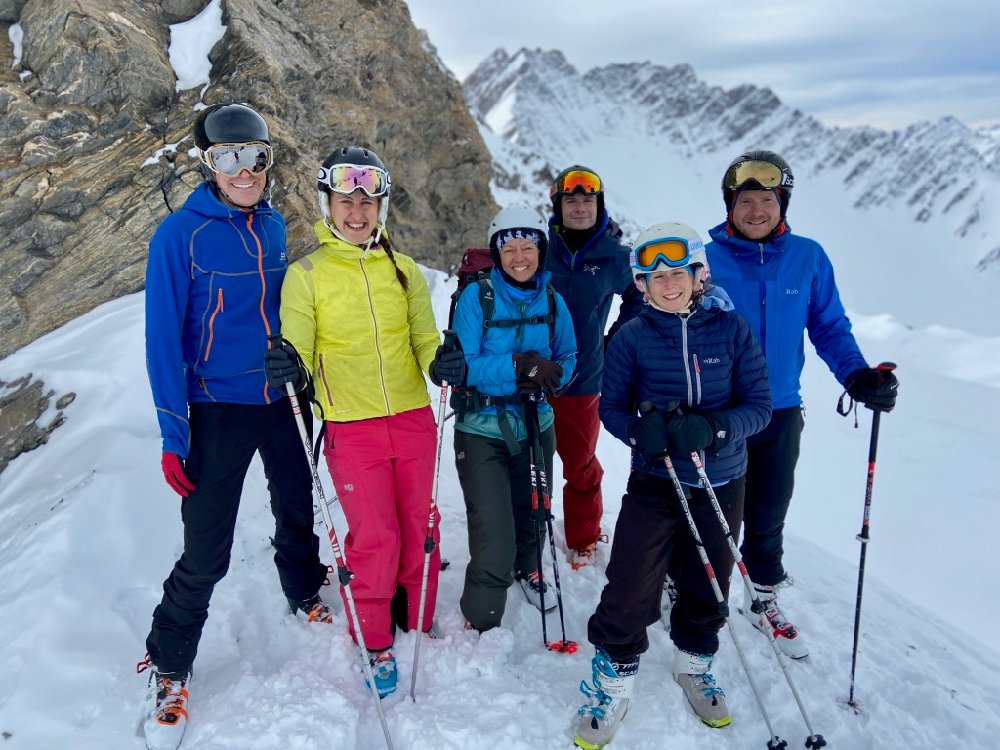