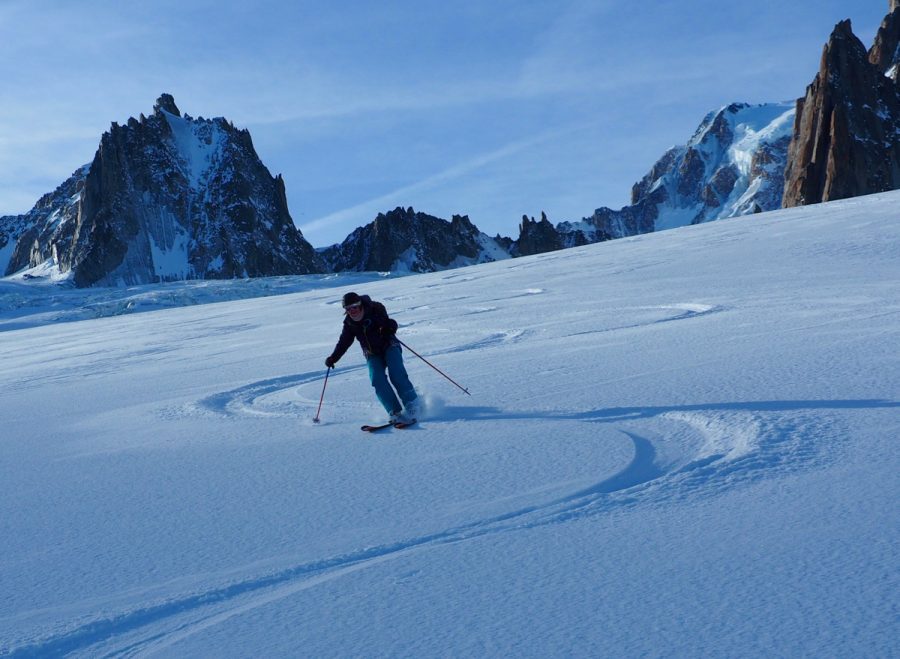 Blue skies and sunshine dominated the weather around the Mont Blanc Massif over Christmas & Boxing Days and it looks set to continue with lots more sunshine over the rest of the week.  There was a stiff breeze at altitude but a pleasant & relatively mild day out of the wind, even above 3000m where we were ski touring in the Vallée Blanche.  There is plenty of sastrugi around near the ridges and cols where the wind has whipped over and this extends for a few hundred metres down the slopes.

Only a few teams were skiing down the Vallée Blanche itself, from both the Midi and Skyway and it was very quiet touring around on the glacier above the Geant Icefalls and up towards the Col de Gros Rognon.   Tracks were seen on the Grand Envers variation as well as some skinning tracks leading up the start of the glacier towards the Aiguille du Plan.  There was also a skinning track leading up the Dent du Geant approach glacier and couloir and leading in to the mixed ground above.   Likewise teams were heading round to the Col Rochefort, down the Italian side of the Geant Icefall, Col d’Entreves and the steep shoulder approach to the Toule Glacier and there were many tracks on the main Toule Glacier descent also.

The snow ridge exit from the Midi station is in difficult and icy conditions with no fixed equipment / rope like later in the season, so it’s a significant mountaineering sortie just to exit the station!  Ice conditions looked generally pretty dry with thin looking ice in the Super Couloir and much exposed bare ice on the Tour Ronde North Face.   Even snowy winter classics like the Toule Normal route looked pretty windswept and lean.

We still have places available for our intermediate ski touring day in Chamonix on the 9th Jan and intro ski touring weekend on the 12-13th Jan.