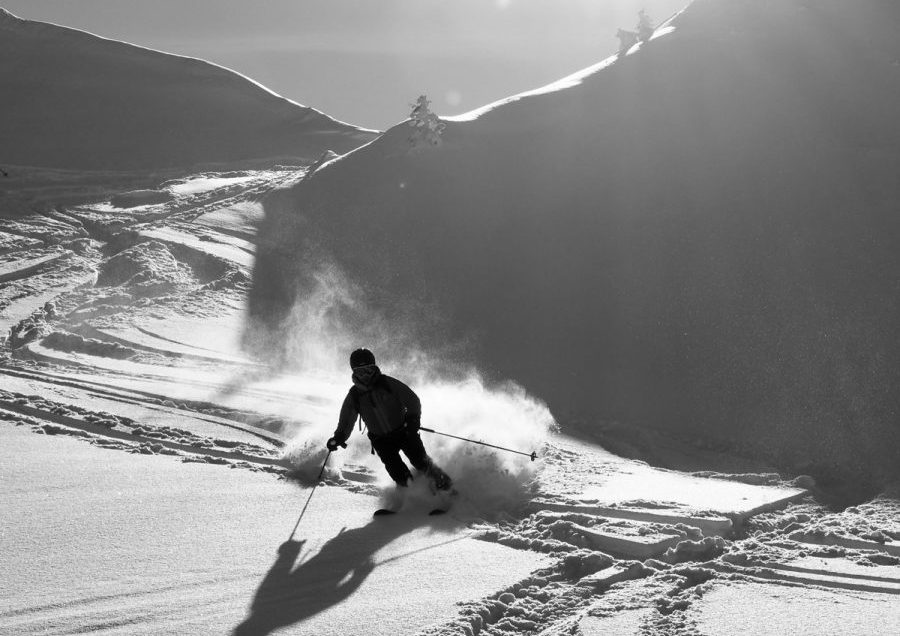 It was a bracing -16C above Megeve in the frosty hollows around the Cote 2000 lift.  This meant for some great light cold snow in the side country….but also for some very chilly rides on the chair and drag lifts.   The Pre Rosset cafe is an excellent base camp to warm up and we did some fine piste and off piste coaching below that as Derek from BASS Megeve had joined us for the last day of our Chamonix off piste & mountain skills course.   We also did some great lift accessed touring taking advantage of superb pristine cold velvet snow.  The bushcountry is still significant but manageable in places and will be getting a lot better with the large amounts of fresh snow on the way.

Teams had skied some steep lines off the West side of Mont Jolly and taken various different lines down in to the meadows above Le Plan and down the valley back in to the lift system at Megeve Mont d’Arbois.  An excellent round trip on the biggest peak between the West side of the Mont Blanc Massif and Pointe Percée in the Aravis.

We also ran an intro touring day at Les Houches.  There is some great snow in the open meadows, even lower down albeit with still quite lean cover below 1500m.   Where there are more woods / bushes / snow shoe tracks to negotiate, like the West Face of the Prarion, the bushcountry is still just too thick at the moment for enjoying linked turns rather than ski woodland management!

We have had another 30-40cms of fresh snow at 2000m over Sunday / Monday morning and, as this has fallen as snow right down to valley floor level in Chamonix, things are also now improving at lower altitudes.

And whilst our March touring weekend is full, we do have places on our March & April Chamonix Off Piste & Mountain skills / ski touring courses.

High Mountain GuidesSep 20, 2020 @ 15:35
Rewarding weekends rock #climbing in both English & Italian #LakeDistrict. From the colour of the skies, you may get them the wrong way around! #Quiz: Name the crag in topo shot and also name team member in red who made the first ascent of England's first F8a?