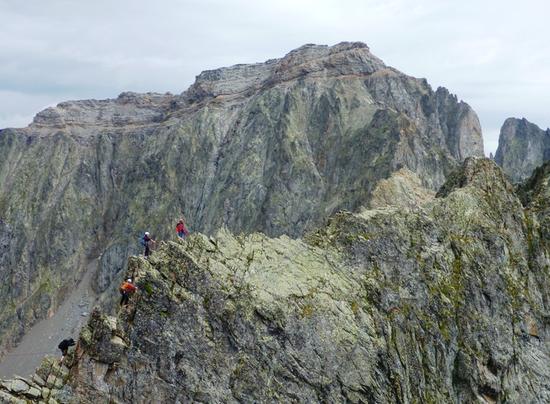 Continued warm, even hot & sunny weather has given rise to some typical late summer conditions. It is late August! The hot weather has well stripped back even high altitude rocky & mixed routes and icy and loose rocky sections are now common on various high mountain itineraries – presenting a mix of conditions as dry conditions are welcome on some routes. The Matterhorn has been in good condition with dry conditions and crampons not required until above the shoulder where there are some remaining icy sections. Likewise on the Dent Blanche.

The dry conditions have made high altitude alpine rock routes popular and there has been lots of activity on the Walker Spur as well as the Petites Jorasses and South Ridge of the Noire de Peuterey. The other side of the Jorasses has remained unusually popular for late summer and the Voie Normale has remained in good conditions through much of the summer. So a great start for Franco in the newly opened hut!

On Mont Blanc, teams have been climbing from the Cosmiques Hut via the 3 Monts although the state of the seracs on Mont Maudit seems unstable and there is a tricky crevasse to cross. Conditions on the Voie Normale on the St. Gervais / Gouter side have deteriorated with the hot weather with reports of significant stone fall in the Grand Couloir. The approach to the Dent du Geant is also described as dry, loose and unstable. On the Tour Ronde conditions were ok for an ascent from the Freshfield col area but the winter voie normale was a ‘disaster’ with lots of significant rock fall in that area.

We have some teams on Matterhorn courses at the moment and some good routes have been completed in the build up including the traverse of the Aiguille d’Entreves, Perrons traverse above Vallorcine, Tour Ronde Freshfield Arete, Pointe Percee, Aiguilles Crochues Traverse and various rock routes in the Aiguilles Rouges.