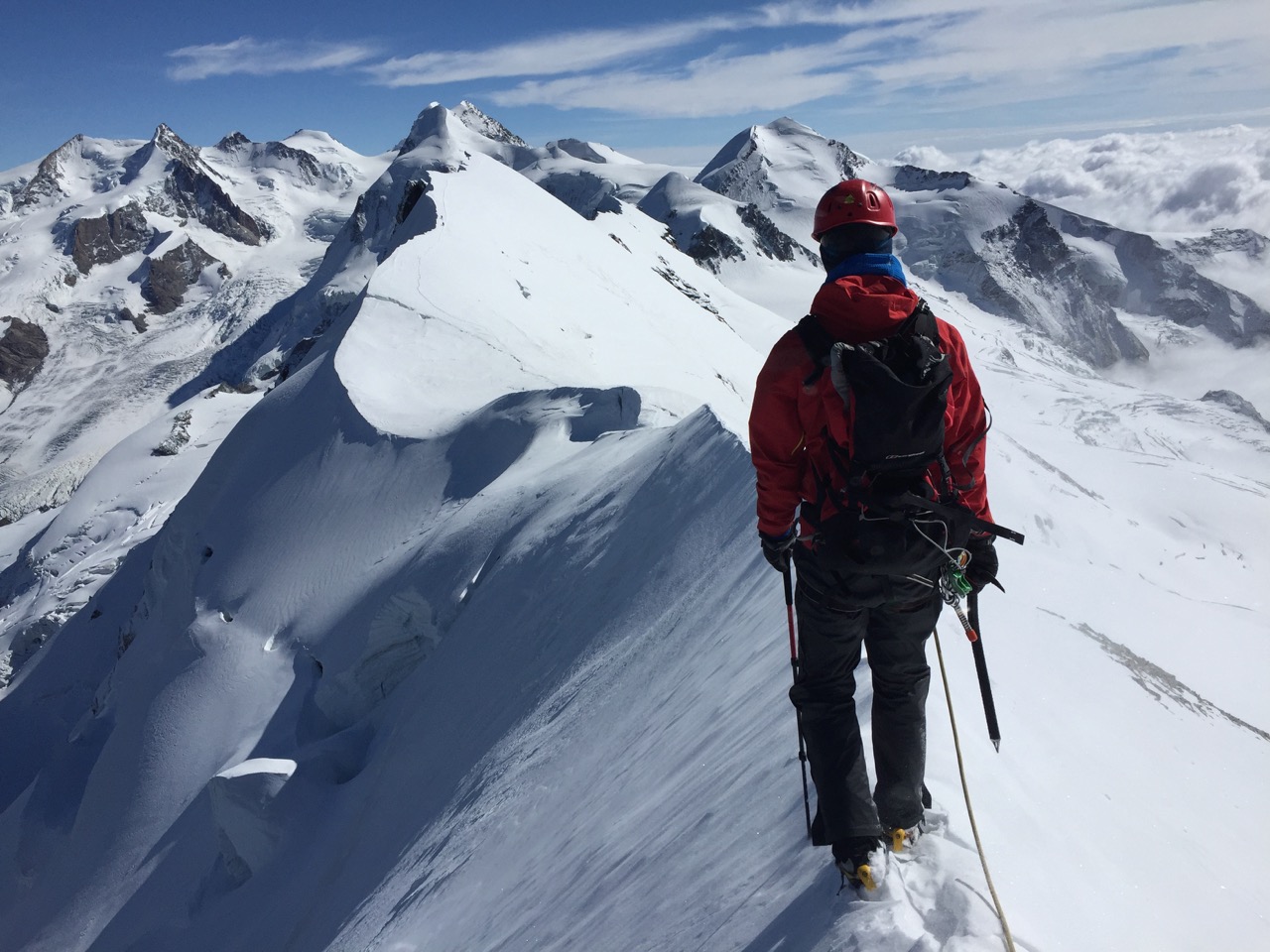 The weather in Zermatt on the first morning of our 3 day Matterhorn training / familiarisation programme was even more uninspiring than the forecast had predicted, which was saying something!   Fortunately there was an excellent breakfast and free flowing coffee at the hotel and the Matterhorn chat was also free flowing, all useful info!

In the end we decided a walk up to to the Hornli Hut would at least give us some views of a wet start to the Hornli Ridge and an opportunity to do some accurate cramponing on the icy approach path and perhaps some fixed rope training on the initial pitches above the hut.

On buying our tickets to Schwarzsee, we noticed the webcam up high was actually showing blue skies.  Whilst we had joked about the steady rain being an inversion…it turned out it was!   The télécabine punched through the clouds above 3000m and we were treated to a bright white light show as the giants of the Zermatt skyline showed off their new fresh white coats!

Very pleasant conditions were thus enjoyed on the traverse of the Breithorn Western & Central summits with a fine narrow snow ridge section linking the two peaks.   Richard starting feeling some affects from the altitude and rapid rise, swift climb on the descent and this prompted lots of discussion about acclimatisation as part of the preparation for the Hornli Ridge ascent.  Happily the rapid descent on the lift provided an almost immediate remedy!

Next day the weather dawned driech again so we reverted to the ascent to Hornli Hut which gave some atmospheric views through occasional clearings in the thick cloud to nearby Swiss Giants like the Monte Rosa, Lyskam, Dent Blanche and Zinalrothorn.   The steep final bastion of the approach path was well icy and gave some good crampon practice.  Then we enjoyed some fixed rope & neat crampon work on rock practice at the base of the Hornli Ridge, before a brew in the Hornli Hut winter room which was very clean & tidy.

The great mountain hotel ambiance was then enjoyed at Schwarzsee with some good views when the rain clouds parted.  The last day also dawned very wet and we made the journey back to Zermatt via a fine footpath descending under the North Face of the Matterhorn before climbing to the traverse balcon leading round to Trift and descent of the final steep gorge leading directly to the Zermatt High street.

Our Latest News From The Mountains….

How fit do you need to be to climb Mont Blanc?

You need to be fit and fit in the right places! The summit day involves around 12 hours of almost constant exertion at high altitude. Whilst this is a generally tiring day there are also specific demands placed on your cardio-vascular system and leg muscles. This is best trained for by going hill / mountain walking or mountaineering. Working out in a gym is a lot better than nothing but is not a replacement for the real thing. The physical challenges of climbing Mont Blanc are often widely under estimated resulting in a lot of folk ‘running out of steam’ and having to turn around on the mountain. It is not uncommon for even very fit people like marathon runners to describe the summit day as the hardest thing they have ever done. Don’t be put off if you think you are ‘more of a tortoise than a hare!’. It is never necessary to go very fast on the mountain, more just to be able to keep moving for about an hour and a half at a time (before having a very brief drink / snack stop). It is hard to get a feel for the way the high altitude will effect you without actually trying it but be aware that it is extremely important to not get exhausted on the climb and completely run out of steam on the descent. So, in addition to a high level of general fitness, stamina and determination are also required to climb the mountain with some style and a decent safety margin.

Do I need any specialist mountaineering equipment in addition to my hill walking gear?

Yes. You will need good quality alpine mountaineering boots suitable for taking crampons and warm enough for climbing in snow in temperatures well below freezing. You will also need, crampons, a harness, ice axe, helmet and rope. To state the obvious, you also need to know how to use it all!

How hard is the climbing on Mont Blanc? Do I need some mountaineering experience?

Via the ‘normal route’ the ascent is made on a rough rocky path, up to the Tete Rousse Hut and, in normal conditions, this should be a fairly straightforward walk. The next section leading to the Gouter Hut, often climbed in the dark, is steeper and involves some rocky or mixed (snow and ice on the rocks) scrambling sections. This is never hard ‘climbing’ but it is necessary to use your hands for the steeper sections and crampons are often worn, giving a fine mountaineering feel. This is the most technically challenging section of the route as, above the Gouter Hut the way ahead lies entirely on snow. The terrain up to the Vallot Reguge is mainly quite easy glacier walking whereas the impressive final sections of the ‘Bosses Ridge’ has some steeper snow slopes. These are sometimes icy and call for steady crampon work. The final narrow section of summit ridge is a little exposed but there is normally a good track and this provides a superb and fitting climax to reaching the summit.

Climbing Mont Blanc from the Aiguille du Midi / Cosmiques Hut involves a longer and steeper ascent on snow and ice. There is one sustained steep snow or icy slope of about 60m to reach the shoulder on Mont Maudit and overall this is a more challenging route. The Italian route on Mont Blanc from the new Gonella Hut is generally not as steep as this ‘3 Monts Route’ but is very long and passes through some big glacier country giving a serious overall feel to the route. There are many other routes up the mountain but they are all technically harder than the main three mentioned here and all require a lot more mountaineering skill to climb.

Whilst, on the normal routes the technical difficulties are not great it is very strongly recommended that you have a good level of experience climbing in crampons and travelling roped together on a crevassed glacier as well as the more general mountaineering skills of looking after yourself and navigating. If you don’t have this experience but hire a Mountain Guide to run a full Mont Blanc course (usually at least 6 days) you can usually develop sufficient skill at the start of the course to go on and climb the mountain with the Guide.

Tips for staying in a mountain Hut

Additional Items to Take to a Mountain Hut

Toilet bags / bathroom products are not required as invariably there are very limited washing facilities.