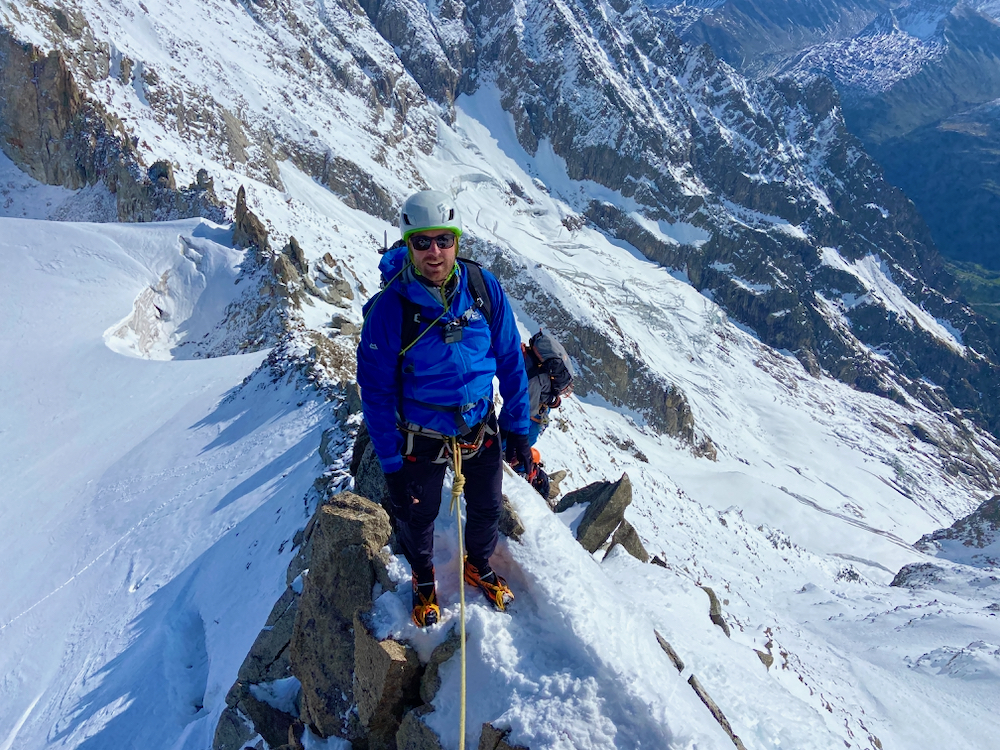 The big storm which swept the Alps at the end of last week and over the weekend had a massive impact on conditions in the mountains, especially in the Northern Alps although the South was not spared the very cold temperatures, very high winds and blasting of snow either! We drove South from Chamonix for 3.5 hours to avoid the major volumes of fresh snow arriving in the Mont Blanc Massif…and seem to arrive at the base of Cerro Fitz Roy!

After the lower Val d’Aosta and Po Valley in the Italian plains had given a pleasant warm and sunny contrast to Chamonix, there was a rude awakening at the 2000m Piana del Re road head on the approach to Monte Viso via the Rifugio Quintino Sella.  It was a punchy combination of freezing cold and blowing a hooly, in the car park!   A night of roaring winds ensued in the hut with shutters banging everywhere and, on going out to check the weather in the morning, nearly getting blown over!

However, as per the forecast, the winds decreased and we soon hit warmer sunny sheltered slopes scrambling over the chains and picking our way up through the snowy boulder field approach to the South Face.  After a brief stop at Andreotti bivi hut we carried on up on to a pretty snowy and icy south face.   A few teams did make the summit but most turned back with the slow going and late hour after the delayed start.   The next day dawned sunny and with less wind, but we had an appointment back in the northern Alps with Mont Blanc.

The difference in snow volume back in the north was stark – there was masses of fresh snow in the Mont Blanc Massif and especially on the northern side where the normal route on Mont Blanc ascends.  There was over 1m of fresh snow in some sheltered locations on the way up to Tete Rousse Hut and reports of more above the Gouter with a strong Polish team turning around having broken trail from Bionassay to Gouter and then running out of steam not far above the hut.

We benefited from their track to Tete Rousse but it was still slow going with deep soft snow but a beautiful ambiance with the mountains blanketed in a heavy new coat of glistening fresh white.  It didn’t help that there was more fresh snow and wind that night which covered yesterdays tracks.  Even getting past the campsite above Tete Rousse was hard and slow going, and we were not the first team out the hut!

A strong Belgian team did a good job of making the track up to and across the Grand Couloir and then seemed to be making steady albeit slow progress up to the Gouter.  Others, including our team were struggling more in the fresh snow and turned around lower down.  Later a few more fit looking teams arrived and seemed motivated to head up the mountain and share the trail breaking and lights were seen around the Dome du Gouter early that night so it seems probable some teams will have made the summit before the next big set of storms roll in on Thursday to fully seal the end of the summer season and shift to the inspiring autumn alpine mountaineering season.  Both Tete Rousse & Gouter Huts closed yesterday and now only have the winter rooms open until next summer season.

The Gran Paradiso got a lot less snow than the Mont Blanc Massif and our early autumn course made the summit in good style after a warm up trip via the Skyway Monte Bianco and night at Rifugio Torino, which are both still open for another month along with the Midi lift in Chamonix.

Despite the Aiguille du Midi top lift being closed today, the Skyway Monte Bianco area was still pretty quiet out on the hill with mainly a few teams enjoying the lovely last day of vaguely summery weather and nice snowy conditions for the traverse of the Aiguilles Marbrees.  There was a light track in place around to the Col Rochefort and then up the NE Ridge of the Marbrees (3535m), but the track took the easier snowy ledges on the Italian slopes and we enjoyed clearing the pristine storm snow and ice off the crest to practice some good mixed climbing in crampons.

We kept crampons on for the whole traverse and it was only the tiny summit block which was devoid of snow.   There has been plenty of rock fall in the area of the rappels leading back down to the glacier on the Torino side once the main section of the South Ridge has been traversed.  So we investigated with caution.  There is a new anchor in the breche which marks the start of the descent, which makes for an easier take off than the lower anchor, which is still there.  We then made an easy diagonal abseil traverse, skiers left down to the next anchor above a steep corner leading down to the glacier.  Thus 2 abseils to the glacier which we did on a single 50m rope.  There is also another anchor in a more direct line below the anchor in the breche which gives a straighter first abseil but is perhaps less sheltered from rock fall if there are other teams above. One other team did the North Ridge of the Petit Flambeau and another team or 2 were out on ski touring gear but there was generally a quiet end of term feeling with more snowy weather on the way and talk of breaking the skis out soon!

Our Matterhorn Training Weekend had a great time in Fort William over the weekend with ascents of both Curved Ridge in Glencoe and Castle Ridge on Ben Nevis with a descent of Ledge Route.  The Western Highlands had plenty of sunshine and dry rock and we were delighted our guests got some fine climbing and excellent training done towards inspiring future alpine projects…

We don’t have any group mountaineering courses running now until summer 2021 but we do have plenty of dates for our classic Chamonix Intro Alpine, Gran Paradiso, Mont Blanc, Weissmies, Monte Rosa Mountaineer, Matterhorn & Eiger courses then.  Watch out for some new courses coming in 2021 for other inspiring alpine peaks…We also have plenty of availability for Chamonix private guiding, rock climbing and expedition training over the autumn months.

Looking ahead to the ski season, our intro ski touring weekends start in early January and run through the winter and spring season alongside our intermediate touring weekends and, as usual, our highly popular Chamonix off piste and touring skills courses which combine off piste coaching from a ski instructor and touring and training with a guide.  There are also some inspiring late spring ski mountaineering options including our Spring Ski Summits and Ski Mont Blanc…

All the best for the autumn season and we hope to start planning a climb – ski – mountaineering adventure with you soon, Rob.