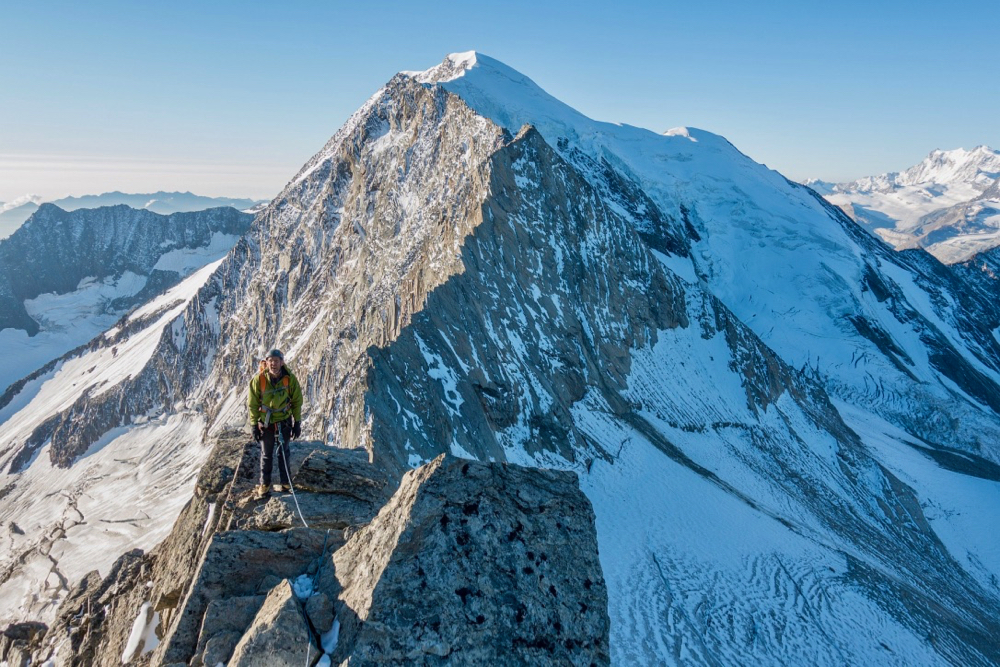 This weekend in stark contrast to the last one was characterised by Grand Beau temps – lovely sunny late summer weather yes, but still with some remaining snow from the big first storm of the autumn last weekend.  One of our teams diverted from their Matterhorn attempt to climb the elegant long South Ridge of the Lagginhorn on which they enjoyed good conditions and even caught the last lift down from Hohsaas, just!

Good dry conditions on the ridge but unsurprisingly more snow on the North Ridge of the Weissmies although more surprising one team did manage to climb it!  On the Matterhorn a little snow has cleared below the Hornli Hut but there remains a lot above it!  Our team turned around quite low down today due to needing crampons from basically straight away on the route.  One team did manage to summit but described it as difficult and slow going and in particular the descent.

On the other side of the Valais Alps and across the Italian border, there are some good conditions on the Breithorn, Castor and Pollux as reported in our last news post as well as plenty of teams climbing on the Italian side of the Monte Rosa.  Like several classic high alpine huts The Rifugio Gniffeti is staying open through in to the autumn season this year.  This includes the Tete Rousse & Gouter on Mont Blanc into the 2nd week in October, so get in touch if you want a Mont Blanc or Monte Rosa peaks ascent in October!

Jonny and our alpine intro team had a good day up on the snowy glaciers of the Skyway Monte Bianco before heading over to the western end of the Swiss Valais and the great base camp of the Orny Hut accessed from the chairlift at Champex Lac.  Conditions on the Trient Glacier are good and pleasant straight forward conditions for climbing the Aiguille du Tour from this Swiss Side.

Last weekends storm certainly also plastered the Mont Blanc Massif and conditions are much improved on the Gouter Route on Mont Blanc itself after the approach to the Gouter Hut from Tete Rousse was plastered in snow and a good track soon went back in.

We have availability for private guiding on Mont Blanc later in September or in the first half of October, or, if you don’t mind winter rooms and a heavier pack, late October too!