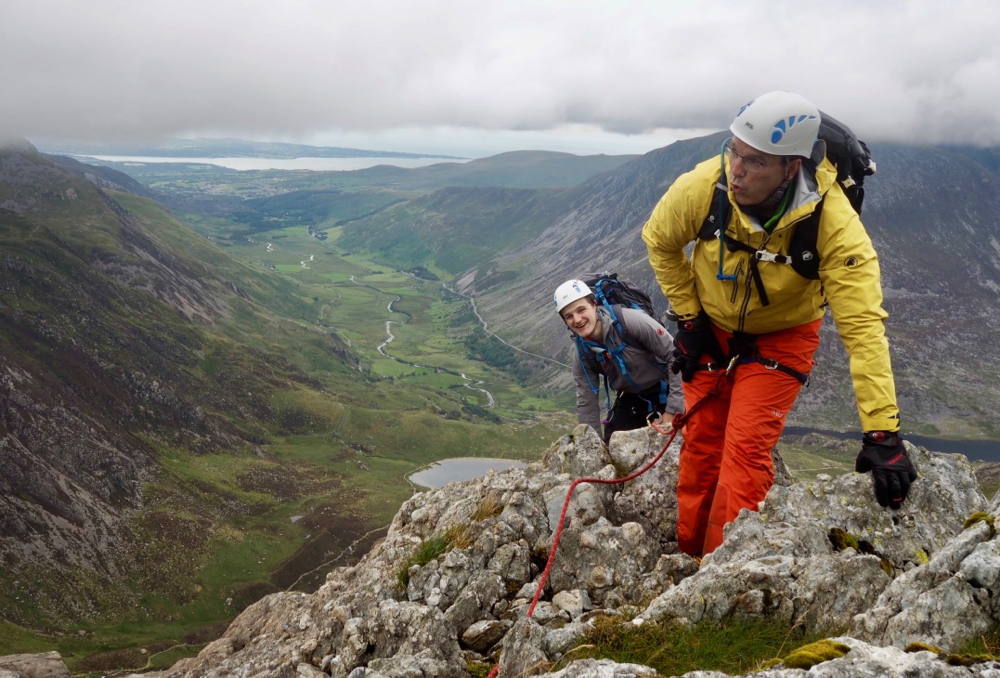 Another hot weekend in the Alps has meant it’s been warm weather even in the middle and high mountains and we have had several teams profiting from the sunny weather to enjoy some Chamonix rock climbing, mountaineering and climbing the Gran Paradiso.

Well done to Justine who overcame some nervousness of heights and utilised good fitness and movement skills to really enjoy the great journey from the Valsavarenche to the summit of Gran Paradiso via a night at Rifugio Chabod.   Like most glaciers, now are past the mid point of the summer season, the crevasses are certainly opening up. But overall snow conditions still remain decent and the team enjoyed a good aller retour summit climb although followed the good new one way system for the tour of the summit block!

We have 1 place left on our Gran Paradiso open course running with 2 teams on the 9-11th September next month.

Dariusz and Neil also enjoyed a warm traverse of the Aiguilles Crochues and lovely walk back via the Lac Blanc and Refuge.  They didn’t use crampons on the traverse at all although did have an ice axe for the snow slopes leading off from the final section of ridge before the long descent to Lac Blanc.  A classic Chamonix outing outing and good steady Matterhorn training milage too.

The hot weather has been less appreciated in other parts of the Massif and unsurprisingly there have been some significant rock falls in the Grand Couloir on Mont Blanc.  Also be aware that the 3 Monts route is by no means an easy alternative and especially this year has some very steep terrain on Mont Maudit and significant crevassing on Mont Blanc du Tacul.  Even some of the high altitude rock ridges are suffering with melting permafrost producing significant sandy deposits around cracks and greater instability as a result of both this and less support from retreating glaciers which previously buttressed up against them and have now retreated lower down the cliffs.  Sometimes a decent alternative to a plan A that fell in to one of these categories is an easy high altitude glacier route which still has decent snow volume, or a lower altitude rock climb which has not been recently impacted by recent melting of the permafrost.

Some teams have been climbing the Matterhorn, via both the Hornli and Italian Lion Ridge, in this hot weather with dry conditions until above the shoulder on the Hornli and some ice now starting to appear on the summit slopes.

We still have availability for private guiding over the summer season for both the UK and Alps and would be happy to arrange some good mountaineering and training with you soon.

We also still have places available on the following group courses running later this month and summer 2020 season:

You can book your place via the pages above or get in touch via the contact form at the base of the page if you have any questions.

High Mountain GuidesSep 20, 2020 @ 15:35
Rewarding weekends rock #climbing in both English & Italian #LakeDistrict. From the colour of the skies, you may get them the wrong way around! #Quiz: Name the crag in topo shot and also name team member in red who made the first ascent of England's first F8a?