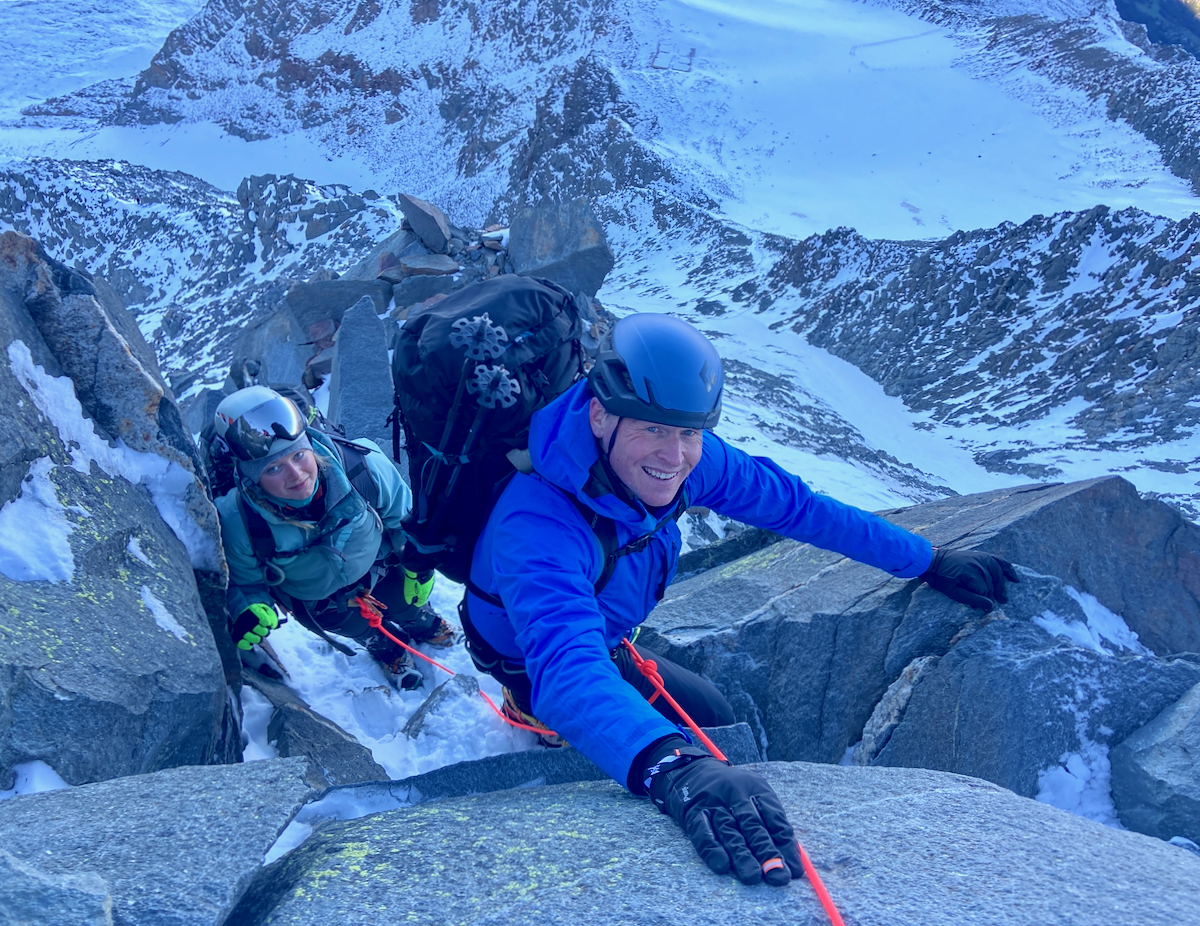 Whilst recent reports indicate that Mont Blanc is getting smaller, we can confirm that this is not making it feel any shorter during the actual climb!   Any ascent of Mont Blanc feels like a fine mountaineering prize but to have the upper mountain entirely to ourselves, and to be on the summit just before the sunset, felt like a particularly memorable ascent.
Whilst the early autumn ascent via the mountain hut winter rooms (featuring a longer approach march, heavier packs and lots of snow melting) is not for the faint hearted, the rewards are high and the mountain has a tough but rewarding larger expedition feel about it.

This expedition starts with the approach march and, with the Tramway du Mont Blanc being shut, we took the luxury 4×4 taxi option to Bellevue 1800m, which still leaves a 7.5km approach to the Tête Rousse hut with 1470m of ascent according to our Strava log here.

Recent fresh snow down to around 1900m gave a stunning fresh feel even to the lower hills and it was inspiring to be heading up in to the enticingly autumnal high mountains.  As per usual in these conditions, the summer ‘path’ to Tete Rousse had a more mountaineering feel with some trail breaking in fresh snow and more exposed sections.

La Cabane des Rognes between Nid d’Aigle and Tête Rousse is now locked although the external toilet is open.  At Tête Rousse there is also a toilet above the summer base camp area and the winter room is open with 12 beds, blankets and very little else.

Melting snow was quite a feature of this expedition and, with no facilities in the huts, it’s necessary to take a stove and plenty of gas.  We used just under 1 x 240g Coleman gas can per person for the 3 day, 2 night expedition for all drinking water, boil in the bag meals, breakfasts and lots of brews!  Check out our Mont Blanc equipment list for updated notes about an autumn trip using the winter rooms.

Conditions for the ascent to Gouter and the crossing of the Grand Couloir looked to be good and recent snow had given a great cool ambiance to the mountains but there not significant of accumulations of fresh snow, lower down on the mountain at least and we hoped it would be similar higher up!

We didn’t see a single stone moving in the Grand Couloir.  Apart from the occasional gust of wind, scratch of crampons on rock and chatter of climbers, it was silent and a great contrast from the stone fall issues here now common in high summer.

The cable across the Grand Couloir was intact and snow conditions good for the traverse and then enjoyable mixed ridge to the Goûter winter room.  This is larger than Tête Rousse, there must be at least 20 beds and blankets but again, not much else, and no toilet facilities, so make sure you go at Tête Rousse!

We had a good brewing session at Goûter and left sleeping bags & boil in the bags in the winter room before transitioning from the steep rocky & mixed ascent to the snowy easy angled big glacier country above.  There was only bits of old track visible where the wind had scoured rather than deposited, but the fresh snow was not deep and the going pretty good.

Stiff winds whipped our faces as we ascended round to the high shoulder on the Dome du Goûter.  Earlier that day, we had met one team who had turned round at Vallot due to frost bite concerns.  We were hoping the combination of heading in to the warmest part of the day and forecast easing in the winds would work for us, but, in the traditions of most good adventures, the outcome of our significant efforts climbing up remained distinctly uncertain!

After a brief pit stop for layering up in a surprisingly neat and tidy Vallot Hut, we set off up the steep and sustained first bosse on this remarkably good high mountain snow ridge.  It was a rare treat to have the whole mountain, above Goûter, to ourselves and the lovely late in the day light and relatively amenable winds were welcome allies.  But, it’s still a long way from the Vallot 4372m to the summit, now measured as 4808m and you can see our journey track on the Strava ascent page here.

Recent winds had mainly blasted this upper ridge section and good cramponing was rewarded by stiff snow and remnants of an old track.  The going was good, but the bosses keep coming!  We were not aiming for a speed ascent but more rather trying to measure our efforts to make it sustainable for the descent, which, to add another dimension to our already exciting autumn situation, looked increasingly like it would be in the dark…

Just as we reached the top of the last steep bosse, and the base of the magnificent final snow ridge (narrow but now much less steep) Adam said he would wait there whilst the rest of us carried on to the summit.  Climbing Mont Blanc requires real personal determination and we are not in the business of trying to drag folk up the mountain against there will, and whilst my high altitude brains was contemplating that against the fact that we were so nearly there…I happily realised that: he was joking!  Sense of humour intact, a good sign.  Onwards and upwards!

It felt particularly special that we needed to break trail along this final upper ridge.  The soft snow was not deep and not difficult, but pristine and beautiful, and of course, the proximity of the summit released another wave of energy and momentum.  As per the cliché, whilst it was a highly memorable summit, it really was all about the journey and we only spent a few moments on top before contemplating the alpenglow lit descent of the Bosses Ridge.

Whilst sunset came on the Bosses Ridge, full darkness arrived on the Col du Dome and we roped together as a team of 5 for the glacier journey back to Goûter.  A tired & thirsty team arrived in the dark and quiet winter room.   Happy to have summited but, for now, even happier to stop, sit down, relax, have a brew, crash out!

If you would like to join us on Mont Blanc in 2022, our course dates are now online and include various options for the acclimatisation & training peaks as well as the option to try the adventurous autumn expedition as per this trip.  In the meantime we hope you can join us for some Mont Blanc training weekends in Snowdonia, the Scottish Highlands and Chamonix.