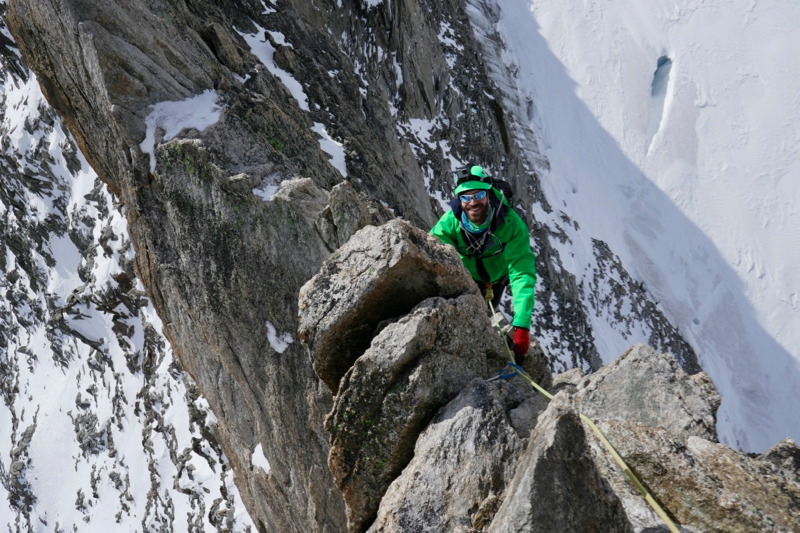 The storm on Tuesday must have put around half a metre of fresh snow down at high altitude and in sheltered places around the Mont Blanc massif.  A few teams must have done a good job of breaking a trail round to, and up the Cosmiques Arete yesterday when the sun came out again!  We enjoyed the pretty consolidated track today with an autumnal feeling ascent and crampons all the way.

The Midi snow ridge was in good and improving condition and various skiers had skied the south facing slope down to the right once the first steeper couloir has been avoided.  There was plenty of fresh snow around the Col du Midi but a decent track leading round to the Abri Simond and across to the Triangle du Tacul:

Various teams were gearing up at the base of the approach apron to the Chere Couloir which now had a new strip of white up it in contrast to the hard old ice that was in evidence.   There is still plenty of that about but it was also interesting to see a team working up thin snow streaks over ice on the left hand side of the first few pitches of the Contamines Mazeuad route.   Conditions still looked pretty dry but with Tuesdays snow and lots more forecast over this weekend, things should improve.

A few teams climbed the Cosmiques Arete and conditions were enjoyable with much of the easier / loose sections now covered in snow.  The South Face had stripped quickly back to sun rock but there was still plenty of frost and fresh snow on the north side and the upper chimney was in fun mixed climbing condition.

On the central section of the route, where the rock fall had been in summer 2018, there are now various options – and 3 teams did 3 different things today!  The old abseil anchor which had a ledge below it is now hanging in space and there are various new anchors including bolt and chain anchors round on the north side of the col and near the top of the old abseil chimney, on the true left bank near the breche at the top.

An enjoyable ascent today and it looks like we got in before the weather deteriorated with strong winds arriving later this afternoon and plenty more fresh snow forecast for next week.

Incase you are interested in joining one of our Matterhorn training or ascent programmes next summer – we now have dates for a Matterhorn summit programme in late August / early September featuring a Chamonix mountaineering & rock climbing warm up and Matterhorn summit period.  We also have places available on both our Matterhorn & Mont Blanc training weekends in the Scottish Highlands in April 2020 and Snowdonia in May 2020.

It felt at time like we had the Col du Midi and surrounding hills to ourselves today.  A rare treat in Chamonix!  The hills were very quiet and even the Midi lift was pretty tranquille.  The fresh snow is starting to make things look a bit better again after a hard hot summer for the mountains but the whitening is quite cosmetic still with regard to crevasses, exposed ice and loose rock.  Loads and loads of snow is required to improve conditions there and it looks like there is quite a bit due for the middle of this week.

After yesterdays light alpine ridge traverse action, today was more ‘industrial!’   We got heavy with ice climbing gear and tackled a fun series of ice, snow and easy mixed pitches on the Facette Nord of Pointe Lachenal.   Some of the fresh snow has stuck to the face and after an initial steep and icy pitch to cross the bergschrund the upper face is mainly nice stiff snow.  Beware the loose rock at the top of the face however and this would be an exposed spot if there were clumsy teams on the summit ridge.

Only 1 team completed the traverse today and another team climbed the lower summit.   The approach apron on the Triangle du Tacul looked mainly exposed blue / grey ice and things like the Chere Couloir looked quite unappealing with old grey ice but apparently it has been done recently.  There were just a few strips of snow leading up to the central Contamines Mazuead route and lots more fresh snow had stuck to the further Left Edge Route.

A few teams were climbing the Cosmiques Arete and 1 team was at the base of the South Face of the Midi.   There was also a track heading round to the Arete Laurence, which apparently now has a fixed rope across the awkward crux slab traverse.   The Cosmiques Hut is closed so the traverse of the gods is required at the end of the ridge to get past it!

A few teams were skiing from the Midi including the short steep south facing slope from the lower Midi snow ridge down to the glacier.  This has some icy patches and crevasses but also a continuous snow section and a few teams had been skiing these very upper pitches of the VB before skinning back up.  Lower down it is still, of course, very crevassed!

Great to be back in the high mountains with a renewed fresh feeling after the stresses of this summers heatwaves.   Wednesdays storms had left plenty of fresh snow on the Italian side of the Vallee Blanche giving both a fine feeling of early autumn and some issues negotiating the freshly buried snow bridges and many crevasses after the hot summer.

Teams were heading round to the Col Rochefort to do the Aiguilles Marbrees and there was also a track going in to Combe Maudit but it was generally very quiet for a Saturday with good weather.  From the Skyway Monte Bianco we headed round to the Col d’Entreves with only 1 team ahead putting a track in through the fresh snow.  There are some big slots about and the route in to the upper valley below the Col went hard right in ascent close to the Tour Ronde.

Of the 3 teams climbing to the summit of the Entreves today, unusually, all 3 teams decided to do the aller retour on the summit and descend back along the fine spine of the main section of ridge and return to the Col d’Entreves.   The descent from the Eastern end of the ridge looked icy and the grooves on the ramps below the summit on the north side of the ridge were choked with fresh snow.   The crevasses to regain the main glacier also looked pretty big with a shallow coating of fresh snow burying any traps quite effectively!

There was very few other teams out on the Italian side of the range and it was apparently pretty quiet on the Midi side too.  One team reported a new section of fixed rope on the crux slab on the Arete Laurence to facilitate the traverse of that feature which is often by far the hardest section of the route.   More info to follow tomorrow.

We have various places already booked on our summer 2020 Gran Paradiso and Mont Blanc courses and some are nearly already full.  You can check out the details and dates for them here:

We also have places available on both our Matterhorn & Mont Blanc training weekends in Snowdonia October 12-13, 2019 and then again in the Scottish Highlands in April 2020 and Snowdonia in May 2020.