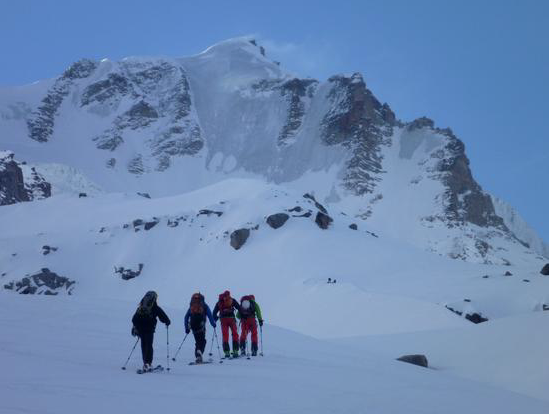 An action packed 3 day course designed for ski mountaineers who want to sample a taste of Italy and climb its highest mountain on skis. The ski touring in the famous Italian Valle d’Aoste is as good as the coffee and we aim to give you an excellent introduction to the area with 3 varied days skiing and two nights in warmly hospitable Italian Mountain Refuges. A ski and culinary experience not to be missed!

This course also often works as a great springboard to our Ski Mont Blanc summit programme and additional private guiding days can be added for further acclimatisation if required.

Pre Course. As with all our ski courses, we recommend you prepare as much as possible in advance with relevant ‘ski fit’ preparation and then arrive at least a day or two early to both warm up your ski legs & check equipment. This is especially important if you will be renting boots or skis & bindings. Please also make sure your skis are well serviced & bindings correctly adjusted.

This course starts on a Sunday and we recommend arriving early to sort equipment & ski legs ready for the more committing hut to hut touring trip ahead.

Day 1. Intro to the course, equipment check and drive through the Mont Blanc tunnel to access the high ‘Punta Helbronner’ lift. A half day spent around 3400m skiing, training, acclimatising and enjoying the truly spectacular views of the Italian side of ‘Monte Bianco’. Descend (either on skis or by the lift according to conditions) for lunch in Val d’Aosta before the journey up the beautiful Valsavarenche.  A steady 3 hour approach to the lovely Chabod Hut gives our first view of the mountain, impressive from this northern aspect! A social night in the hut is then spent and the plan discussed for the Paradiso summit day starting early the next morning.

Day 2. An early breakfast is taken to begin the substantial (C.1300m) ski ascent of the Gran Paradiso. The journey involves snow covered glaciers, steep snow slopes and, at the top, a short but impressive mountaineering ridge. A great summit with fantastic panoramic views of the French, Swiss and Italian Alps. The ski descent down to the Vittorio Emanuelle Hut allows a traverse of the mountain to be completed and offers some fine varied skiing, mainly on northerly aspects and often with powder at the top and spring snow lower down. After a late lunch there is the opportunity for another little leg loosening skin, a bit of technical training, or, more commonly, a siesta!

Day 3.   This final day turns the ski ascent of the Gran Paradiso in to a lovely tour of the upper Valsavarenche and offers a superb long final ski descent out of the high mountains. A steady traversing ascent is made below the magnificent North faces of Ciaforon (3642m) & the Becca di Monciair (3544m) to where some excellent skiing links down in to the main upper Valsavarenche. This lovely final valley leads up to the Col Grand Etret at 3150m offering fine views to the South towards the Valle dell Orco. Again this upper north facing section often gives lovely sheltered powder slopes running down the massive main valley in to spring snow lower down and hopefully lasting all the way to the journeys end, the cafe in the small hamlet at Pont at 1960m. Pasta & cafe here whilst admiring the mornings tracks over 1000m above is a great end to the course before returning to Chamonix mid afternoon.

A good general level of fitness is required to complete all three days and particularly the long summit day (an ability to comfortably maintain an ascent rate of 300m/hr on skins for up to 5 hours). Very effective off-piste skiing ability is also required. This means being able to make linked short radius turns in a variety of steep off-piste snow conditions up to the off-piste equivalent of black runs or even steeper (35-40 degrees).  Some solid ski touring experience is also required, experience using ski crampons, traversing steep slopes and making solid and reliable kick turns.   So if you don’t have these skills, please check out our introduction to ski touring course. Mountaineering experience with crampons would be useful but is not essential.

A great week in the mountains for my son and myself under Rob’s expert guidance. First day refreshing our touring skills in Chamonix. Second day was a quick trip up to Pointe Helbroner for some glacier skills and then a 3 hour skin up to the Chabod Hut in the Gran Paradiso Park. On day 3 we took our time to get to the summit – mainly due to my lack of fitness – but the benefit was that we did not have to wait on the summit ridge and we had fantastic snow on the way down. The last day was the long traverse to the Col del Grand Etret – where we had fresh tracks in perfect powder. All in all a perfect week with great skiing, a 4000m summit and beautiful scenery. Thanks Rob, can’t wait till next year!

Please note that the detailed kit list, given via the link below must be followed and all ski kit including boots, skis, skins, ski crampons, poles, transeiver, shovel, probe must be hired in advance or arranged in advance with us.

3 Days with 2 nights in mountain huts

Guiding Ratio of 1 Guide to a Maximum of 4 Guests

Build up to the ski ascent of the Paradiso by linking this course with our dedicated Off-piste coaching & ski mountain training course the week before or one of our Ski Haute Route journeys after this course.

What’s included in the Price?

Please Enquire Via The Contact Form At Base Of Page

If you have skied on the Gran Paradiso recently please add any relevant comments on snow & ski conditions via contact form at the base of the page. Thanks, bon ski.

Great snow cover on both the high glaciers and the lower slopes above the tree line on the ski ascent of the Gran Paradiso via the Rifugio Chabod.  Good continuous skinning from above the Ranger Hut at 2200m and loads of snow on the upper slopes and even the summit ridge!

The Rifugio Chabod is now open until the middle of May and teams are skiing the mountain from both this side and the Rifugio Vittorio Emanuelle with snow cover all the way down to the upper Valsavarenche.

Very enjoyable 3 day tour of the upper Valsavarenche with 2 nights spent at the Refuges Chabod & Vittorio Emanuelle. Snow conditions were good to begin with & improved with 10cms of fresh snow at 2500m last night. Superb powder down from the Cols Tresenta and Grand Etret today then fine pitches on spring snow down the lower valley to around 2150m. This still leaves a bit of bush whacking before the sanctity of the path is reached…and then the cafe!

As per about normal for this time of year, the ascent to the Chabod was made on foot up to the little National Park building on the path at around 2150m. About an hours ascent with skis on the pack before a pleasant steady skin to the hut. We had already skied the upper Combe de la Vierge from Hellbroner that morning but other teams carried on above the hut to get some good turns.

The glacier from the Chabod was generally well filled in and a pleasure to skin up. Like most teams we descended via the Vittorio Emanuelle Hut which had good snow cover, with a light wind crust & some sastrugi up high followed by some superb powder and spring snow lower down. The final steep slope below the summit plateau, which has been bare ice all season, is now well snowed up and provided a pleasant easy skin & ski back down sans problem.  All in all 3 excellent days touring around the Paradiso. Looking forward to going back again in a couple of weeks, although the bush whacking in the Valsavarenche may have increased considerably by then!

Many teams have been profiting from the perfect weather and good snow cover to ski the Paradiso from both the Chabod & Vittorio Emanuelle Huts as well as, for the very fit, from the road head at Pont, a solid 2000m+ ascent. At least there is a good cafe / pit stop option at the hut on the way down!

Strong winds have left both scoured and even icy patches in places high on the mountain and above the junction of the 2 routes, making the very last section less pleasant to ski. General cover is good though with teams finding decent conditions on the traverse from Vittorio Emanuelle to the Col Grand Etret at the head of the Valsavarenche, and then all the way back down the valley to the cafe at Pont!

The Chabod Hut is reporting 15cms of overnight snow this morning and still snowing quite hard now, with light Southerly winds. This will provide a good mini recharge for the glaciers as the weather improves again next week.  More conditions info to follow later in the spring as our next Gran Paradiso courses visit in late April and early – mid May.

Extensive snow cover still remains above C. 2200m in the Paradiso National Park and snowshoes were used to get to the Refuge Chabod & for our ascent to the summit. Various other teams had climbed & skied the N. Face & were reporting good conditions for both ascent & descent!

Nobody told the snow pack that spring has arrived here in the Val d’Aosta. There is still masses of snow. This could get problematic & lead to high avalanche risk if the weather turns mild & summery. But for now there was continuous snow almost to car park level in the Valsavaranche. After lunchtime this was getting soft & heavy & on our descent from the summit we aimed to hit the tree line at 11.30 which we just managed. Even then there were a few very soft turns on the lower slopes!

A great ski ascent & descent of the mountain via the Chabod Hut. Good conditions on the glacier.

Our Recent News From The Mountains 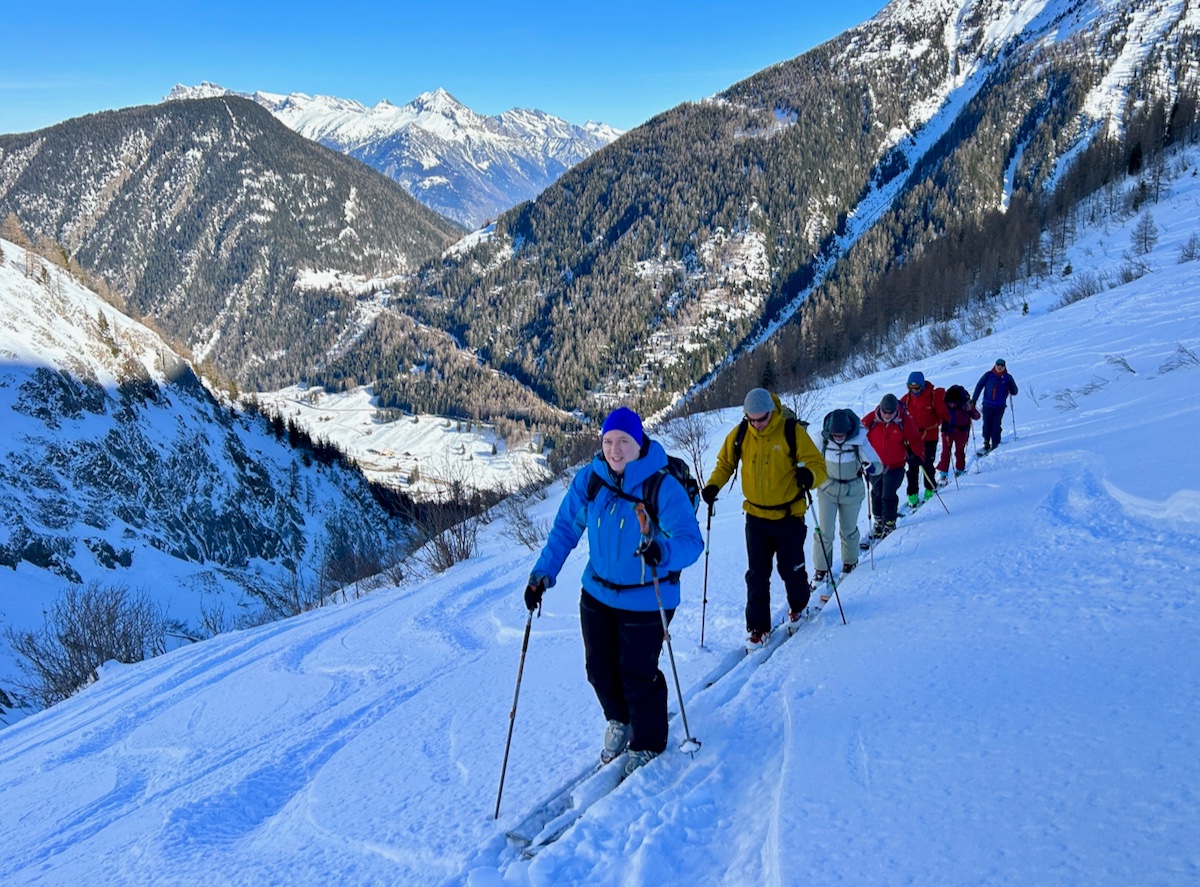