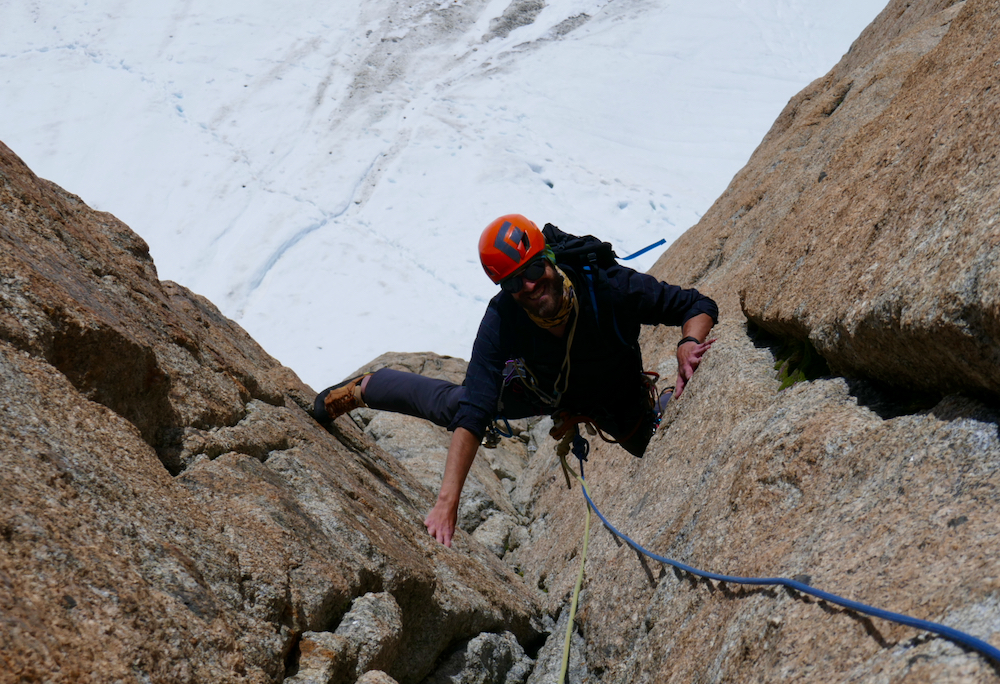 Whilst Chamonix seemed very quiet, there were ‘lots of teams enjoying the quiet conditions’ around the Col du Midi and the generally warm and sunny weather before the storm rolled in later.  Whilst the snow volume is good on the Midi station ridge and in general on the glaciers around the Col du Midi, the South Face rock climbs were dry and warm and numerous teams were climbing on the Rebuffat, Contamines and Kohlman, with some pretty impressive leader fall action in evidence too!

The snow volume is now better than this time last year with less crevassing in evidence below the Midi South Face and decent snow volume albeit with very soft snow today even early on, out of the track.  The normal route on Mont Blanc du Tacul had a big zig zag track going up it and various teams climbing here and on the Triangle with tracks on the Contamine Mazeaud link up to join the Chere Couloir descent and tracks over on the Left Edge Route top out and one team in evidence climbing up to to the summit ridge on the Tacul from the top of the Triangle.

Numerous teams had also climbed the Midi Plan Traverse and reported decent snow conditions albeit soft out of the track this morning.  One team reported that the fixed ropes sometimes in place were either damaged or not there and they had not used or seen them.

There are also tracks in various places on the North Face of the Midi including the Frendo Spur, see photo, with one team topping out early this afternoon via the rock rognon finish.   The upper snow fields looked good so should be in decent conditions after a good freeze.

There were lots of tracks visible on the Italian side of the Vallee Blanche too heading round to the Aiguille d’Entreves, Tour Ronde, Dent du Geant etc.  Several teams have been climbing the Grand Combin in recent days via the Valsorrey Hut and the notoriously loose Arete du Meitin with one team even summiting from the road in a single big push.

There is some good weather forecast for this weekend and early next week and we have availablilty for private guiding for mountaineering or rock climbing, from a base in Chamonix or in nearby Swiss Valais or Italian Val d’Aosta.