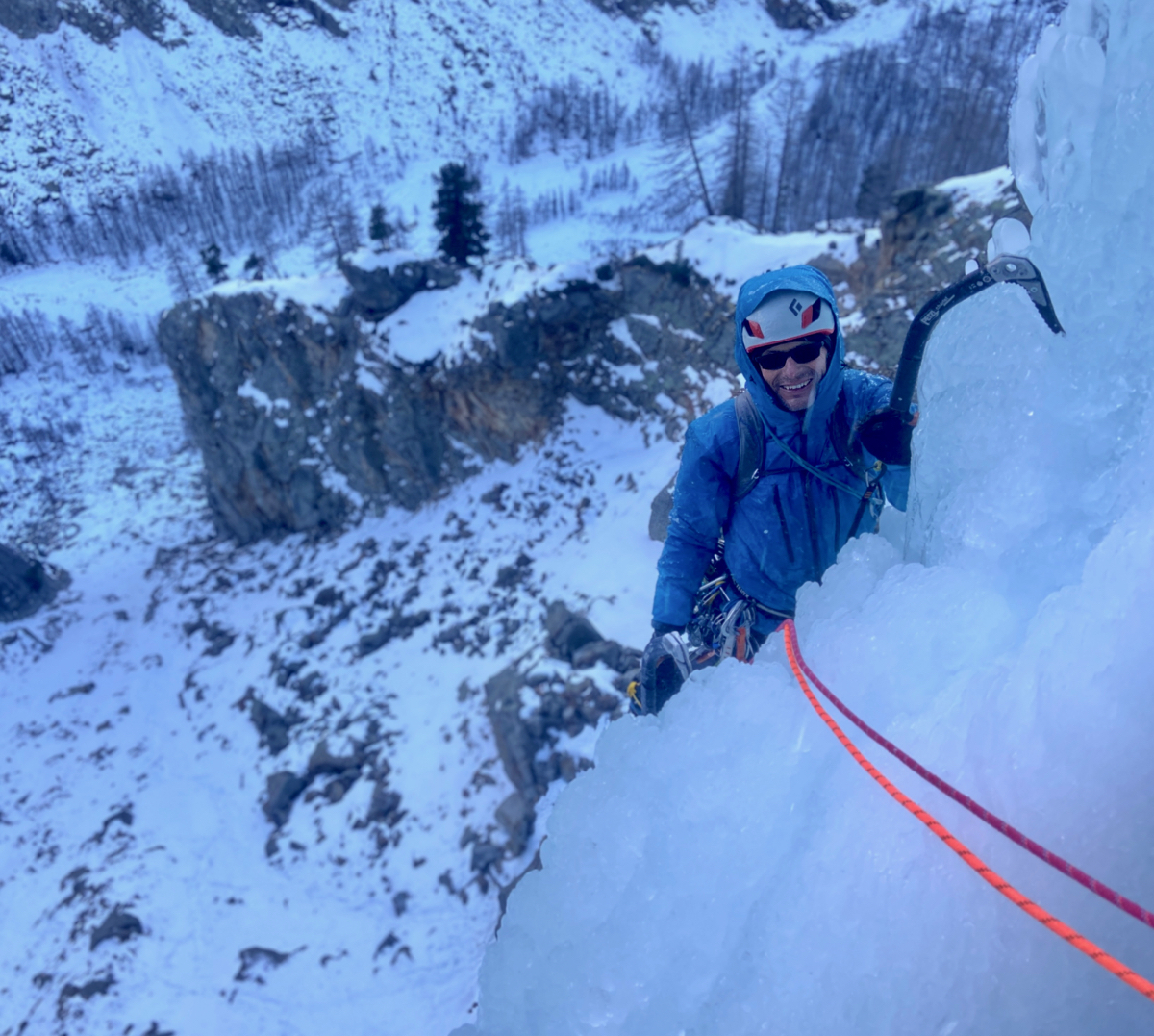 In Cogne the sun has been shining and the ice has been building.  Whilst there is little snow left on the sunny slopes there is plenty of ice, and it’s pretty fat on plenty of great routes at the moment…

We were keen to sample some of the steeper servings of ice available in beautiful Valnontey and, arriving pretty late, we took a walk to check out conditions and swing the tools to warm up for an early start the next morning…

Some of the sunny and slightly less steep lines on the true left bank of the Valnontey are in good condition and there were numerous teams on the long and appealing Il Sentiero dei Troll.  Although these routes get the sun and can have considerable avalanche risk, now seems like a good time to be doing them as whilst the ice is well formed and fat, there is little snow and a very good overnight freeze.

Likewise on the shady side, the classic Patri looked fat and neighbouring L’Acheronte had teams on it.  We continued further up the packed down climbers path to join the long approach climb up to the base of Repentance and Monday Money.

Despite the lateness of the hour, and with the knowledge there is a bolt belay in the cave on the right, we set off up the steep first pitch of Repentance.  Using the higher left hand approach meant we were able to climb up to the cave belay in one long pitch of about 55m.  Note that from the right hand approach this is more than 60m and thus most teams were splitting this pitch with a belay in one of the fine ice grottos along the way!   Likewise, even with 2 x 60m ropes, the abseil from the bolts in the cave does not quite take you off the ice at the base of the route.

The climbing on this big initial pillar is sustained and engrossing with lots of weaving around bulging medusas which provide some steep moves but also some brilliant footholds!  There is a constant cold shower pouring down the centre of the pillar so hard shell waterproofs with a good hood & spare gloves recommended!

As the hour was late and we were both pretty soaked from the cold shower we headed back down the path enjoying the beautiful full moon lit ambiance of a positively glowing Valnontey.  The fondue and other local culinary delights in the village are also highly recommended!

Having left the wet cave at dusk we re-gained our previous high point just after dawn next morning and any hopes of a reduced flow in the shower were dispelled by the ice coated jacket and ropes.  But the back of the cave is almost dry and we took the weasel detour up and behind an icicle which means the upper pitch is approached in the dry. Impressive exposure is encountered with the step out on to the final pillar.

This pillar was an exquisite feast of positive hook after positive hook.  Vertical for 15m but with sufficiently funky ice to get good footholds to place ice screws and barely the need to swing the tools.  An ice climbing treat par excellent and finishing with another bolt belay on the rock above.

Whilst many teams abseil off from here, the continuation is recommended, both for the 2 nice pitches more climbing and topping out on the expansive plateau above…

Arriving on the plateau above gives a rare sense, for Cogne, of actually topping out on the route and there are brilliant views of the upper Valnontey and into the glacial heart of the Paradiso National Park.  Also across to the intriguing intricate path and ascent to the Leonessa bivi hut (see below).

We continued the topping out and journey theme (and avoiding rapping back down in to the cold shower) by traversing across to the top of Monday Money and abseiling down that route.

In five abseils, all off modern bolted anchors, we had an interesting (and dry) descent of of the fat ice in this impressive shady ice feature which is often one of the last things still in condition in Cogne as the season progresses.

Whilst traversing back to the bags at the base of Repentance, with a wary eye on ice fall from the team established above, we came across a shiny ice screw lying in the boot track.  ‘Booty’ I thought, an excellent end to an excellent days climbing…but randomly I then noticed it had my name on it!  Neither of us had noticed dropping it during the route but at least we had now found it!

Repentance has been bird banned for numerous recent years so it was a pleasure to take the opportunity of good conditions and no bird ban this year.  See the notice above for the other routes, further along the valley, Flash Estivo etc, which are indeed prohibited this season.

Please get in touch if you would like to do some ice climbing – training – guiding in Cogne or Chamonix.

We also have spaces on our intro and intermediate Chamonix ski touring days and weekends.