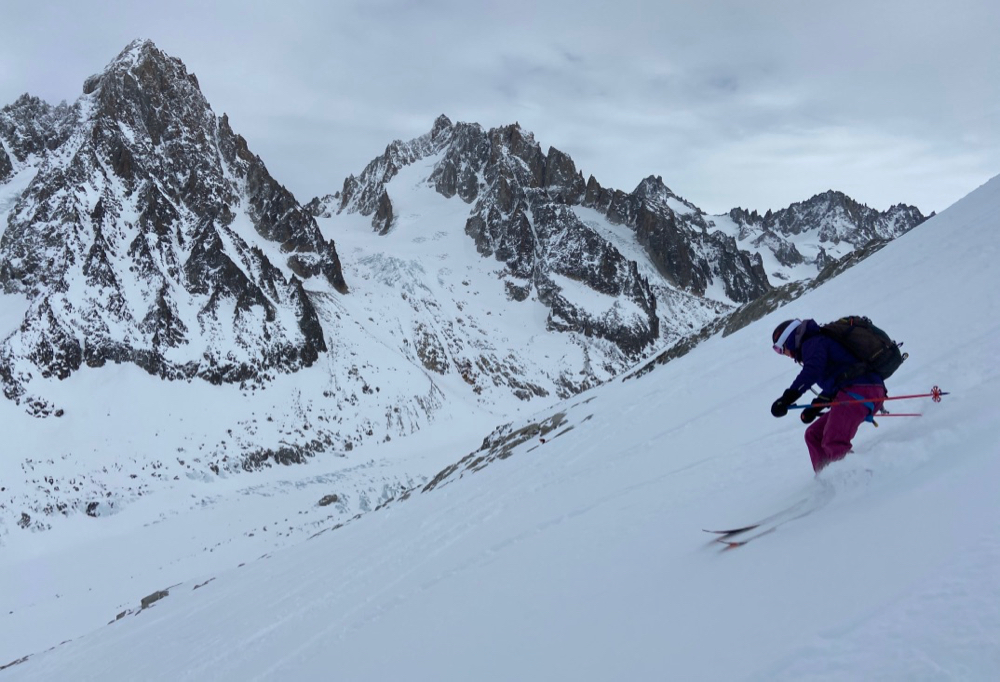 The storm which started on Monday afternoon must have put down half a metre of fresh snow above 1800m in many locations around the Mont Blanc and Aravis Massifs, and best of all, without much wind, which makes a pleasant change this season.  The result was a high avalanche risk, but also, in carefully chosen locations, Hollywood deep, light, cold powder smoke which was sheer pleasure to ski…

There seemed to be more people skinning uphill – than skiing downhill – at the Grands Montets today – which was fair enough – there had been a powder feeding frenzy of the fresh snow yesterday – so anything lift accessed was soft bumps today – but the snow above the lift line was mainly, outstanding!

We broke rank with the continuous files of ski tourers heading over the Col Rachesses, including the army, and headed back down the Combe.  We were glad we did, the snow was outstanding – all the way down to the junction with the lift accessed terrain, at which point it was time to head back up.

There was an excellent track in place and lots of snow in the bowl below the Col Rachesses itself but we still put ski crampons on for the exposed final traverse to the col.  The cafe hut on the col is still not open!  Many teams had skied down from here including some going left in to the Grands Mur whilst others carried on around and up to the Col Grands Montets, “pente de pisteurs” and the top station.  The glacier seems to be well filled in here and the snow was still excellent and a rare treat to have high altitude powder with little wind effect.

There were teams touring on many of the classic Argentiere Basin ski tours including Col de Argentiere (looked hard work for the teams trail breaking up this), Col de Tour Noir, Col de Chardonnet (teams skinning up the lookers right side of the glacier) and Col de Passon with numerous teams touring up this from the Argentiere Glacier via a good track, cramponing up the couloir to the Col and skiing apparently very good snow down to Le Tour.

Teams were also skiing the normal Argentiere Glacier descent from the Montets as well as various steeper couloir entries from the upper Glacier des Rognons.  Over in the Aiguilles Rouges on the sunny side we could see tracks heading up towards the Col Crochues.  Teams in the Vallee Blanche today reported more wind effected snow frequently with a wind crust.   Yesterday it was hero snow but the problem was, avoiding getting avalanched on anything too steep but on the other hand, not being able to move at all on easy angled slopes!

Yesterday we enjoyed lots of fresh tracks in the domain “Portes de Mont Blanc” with some very good deep powder and fresh tracks initially on the piste – then side country – then from some mini ski tours.

The touring was pristine and beautiful with trees heavily laden with deep fresh snow, but anything easy angled was pretty hard work and could involve straight lining or even poling down hill to be able to plough through the pow!

There is plenty more snow due in the mountains tomorrow – Friday and into next week, as has often been the case this season, the rain snow limit looks like being a bit of a roller coaster, and there will be some difficult conditions and high avalanche risk in the days to come, but the overall snow volume is shaping up well for the rest of the spring ski touring season….

Most of our winter – spring 202o ski courses are sold out, but there are still a few places left on the following programmes…

1 Place Available – and several folk enquiring about it

Full – but could still add a team of 2 to this programme with a private guiding warm up & acclimatisation programme.