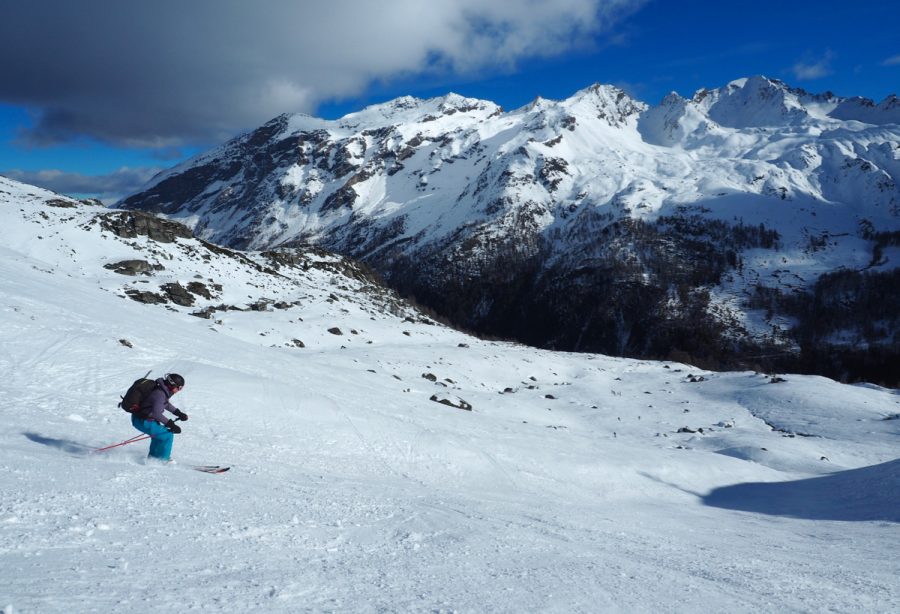 We joined half of Italy this morning for ski touring in the upper Valgrisenche.   The combination of great weather, decent snow volume at higher elevations, the end of the New Year Holidays and a fun, almost pisted, like ski down the mountain meant there were plenty of folk with the same idea.  Namely head to Bonne in Valgrisenche, have a cappuccino at the nice café and skin up Arp Vielle which is one of the few peaks in the area that the Heli skiers don’t land on!

There was an almost comically long crocodile line of ski tourers making the ascent, mainly fairly rapidly, up through the Larch forest and onto the lovely easy meadows with great views across to the Eastern side of Valgrisenche across the Lago di Beauregard with the famous dam at the end.  Most teams were heading up on to Arp Vielle (2963m) with plenty also heading up to the shapely col at the head of the valley, Forclaz du Bré da Bonne Col at just over 2800m.

The sun was warming things up and getting backed up by a warm valley Foehn wind giving relatively warm air temperatures.  This meant the snow actually softened on the S, SE and E aspects and was pleasant to ski.  with some almost spring like snow lower down on steep sunny aspects.

The snow on the exit from the Arp Vielle valley was also très agréable due to the huge amount of skier traffic which had created a very smooth and enjoyable slick track leading back across the meadows, along the forest track and all the way back to the cafe and village of Bonne.   An enjoyable ski tour in a beautiful valley, not a solitary one today but that’s because folk have been pushed toward the few locations with a high altitude start and steady track leading up to the better snow conditions.

There were a few flocons of snow today in Chamonix and over in the Western Swiss Valais – mais pas grande chose! There was a lot more in the Northern Swiss Alps, like the Bernese Oberland with plenty more there Tuesday and a bit less around the Mont Blanc Massif.  So hopefully we will have a bit of January powder to enjoy then!

We have places available on our Intermediate Ski touring day in Chamonix next Wednesday 9th Jan and also on the Intro Ski Touring weekend in Chamonix on the 12-13th Jan.