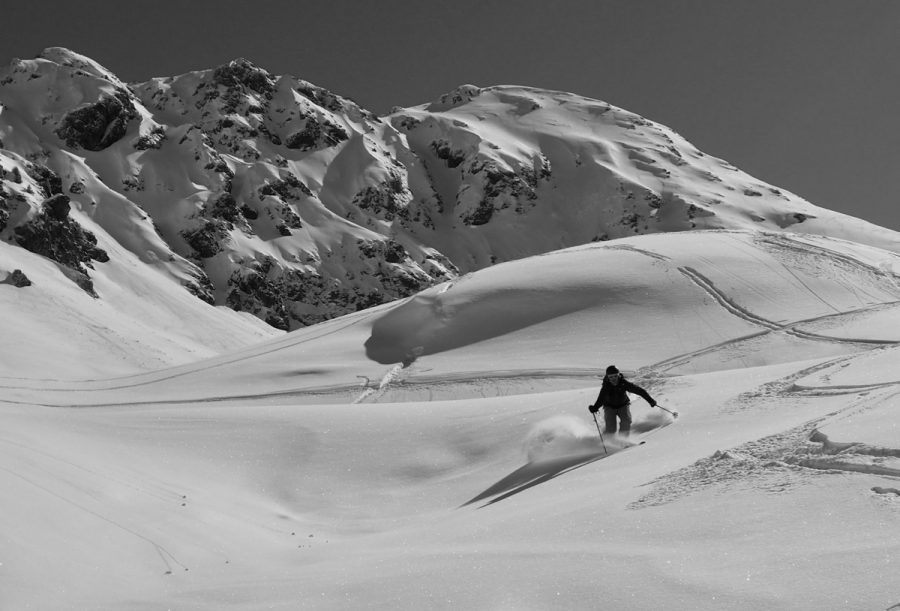 Despite the violent winds that shut many of the lifts around the Mont Blanc Massif yesterday, there was plenty of fresh smooth velvet snow to be skied today at Les Contamines, Megeve, Chamonix & Courmayeur.   Even the sunny slopes high in Les Contamines gave good fresh tracks straight off the lifts this morning.  Although things were starting to get a big heavy by late morning and it was time to head to the shady side, where the snow was lovely velvet with many teams enjoying the runs down towards Hautluce and the touring accessed from the Buche Croisé chairlift.

There were a few teams doing all the classic Contamines Cols – Cicle, Chasseurs, Fenetre and a few more heading round to the Rochers des Enclaves.   The skiing off the Col de Chasseurs looked good – steep and sustained right down the fall line, although quite a big call to head in there after all that fresh snow and wind.   Likewise numerous teams had skied steep lines between both the Fenetre and Cicle and Cicle and Fenetre, as well as some steep lines below Mont Jovet and off a high shoulder on Mont Tondu.

There were also many tracks coming back the easier way from Mont Jovet and the Col de Bonhomme.  The Roman Road was in reasonable condition all the way to the valley albeit a little icy low down.  Some teams cramponed the last section but most skied and slithered down!

We have some remaining places on forthcoming group ski touring days…