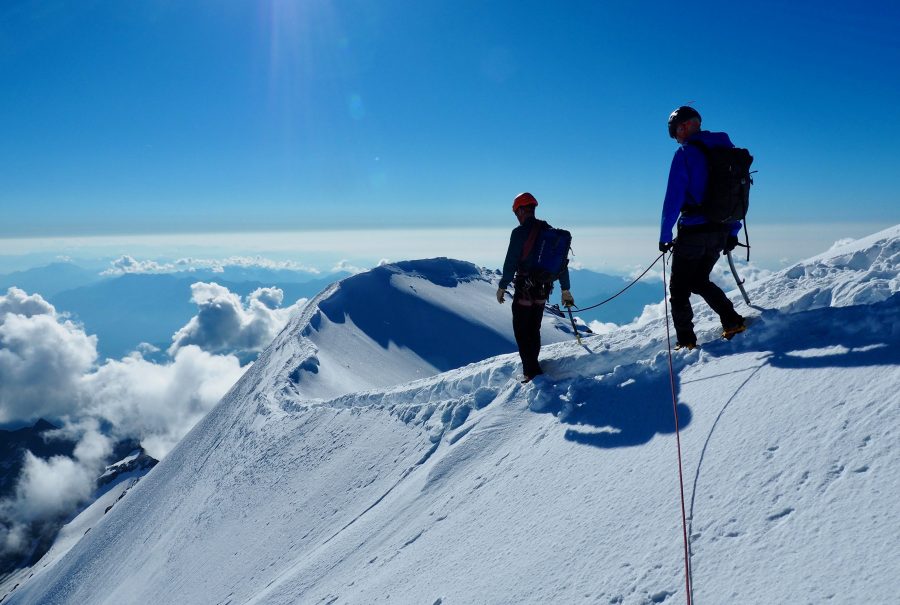 We have had 2 Weissmeis courses reach the summit via the South Ridge in the last couple of days.   Well done to the team today, warming up for Mont Blanc, who were enjoying Rösti in the lovely Almageller Hut when the storm arrived! A great ascent in its own right and with the aller retour on the South Ridge, also offering plenty of rocky scrambling and down climbing training, again, good practice for the Gouter Ridge on Mont Blanc.

There was snow on shady aspects above about 3200m but the rocky South Ridge was generally dry and we climbed to the fore-summit without crampons, having gained the South Ridge pretty low down compared to some other teams who climbed the sustained snow slopes on the E side of the ridge.   There was a great re-frozen track in the excellent summit snow crest, and with perfect weather and great views, this was a real alpine treat!  Plenty of teams were descending the North Flank but we headed back down the South Ridge for some good Matterhorn training with lots of easy rocky scrambling in descent.

Before starting the attractive walk up to the Almageller Hut we got in a quick Chamonix alpine route accessed via the Grands Montets ski lift.  The short East Ridge of the Grands Montets gives a fun rocky scramble with the option of doing some slightly harder rock pitches.   The descent is made via a short steep / icy / rocky slope with a crevasse at the base which we short roped down before lengthening the rope for the easy glacier journey down towards the base of the spur.  It’s worth avoiding the very first short pitch as this has plenty of loose rock and is easily by-passed on the right.   After that there are some fun short pitches on solid rock with plenty of easy scrambling along the way too.  With a summit on the Montets viewing platform at 3300m it’s a good acclimatisation outing too!

The poor weather arrived a bit early today and we got snowed on during the traverse of the Aiguilles d’Entreves, accessed from the Skyway Monte Bianco.  The rock was dry, until the fresh snow arrived, and we climbed without crampons from glacier to glacier albeit with a 25m abseil from the NE end of the ridge to reach the glacier and avoid the icy traverse from the normal way of finishing the route back on to the glacier.   The glacier has plenty of crevasses and is in late summer mode but had a good track and was well frozen today.

Late summer conditions prevail around the Vallee Blanche with an icy and crevassed glacier and many rock falls in evidence from the loose flanks of the Tour Ronde, Marbrees, Dent du Geant and many other places.   The Tour Ronde was deserted and conditions look very poor even on the Col Freshfield approach to that Arete.  Teams were traversing the Marbrees but again the descent couloir on the Torino Hut side is dry and loose.   Likewise the approach to the Dent du Geant, dry and loose.  There were some tracks leading across the heavily crevassed Vallee Blanche and whilst it looked very quiet on the Col du Midi due to the Midi lift being shut at the moment, a few teams were climbing the Mont Blanc du Tacul normal route and some of the other

After an excellent panini and cappuccino stop at the Skyway / Hellbronner café it was snowing hard again at 1400 today, so we returned to Chamonix, where it was raining hard!   More fresh snow is forecast tonight above 3300m before the return of some excellent mountain weather this weekend and into early next week.

We still have 1 place left on our Climb The Weissmies course running 9-11th September as well as places on our Climb the Gran Paradiso course, 30th Sept – 2nd Oct.