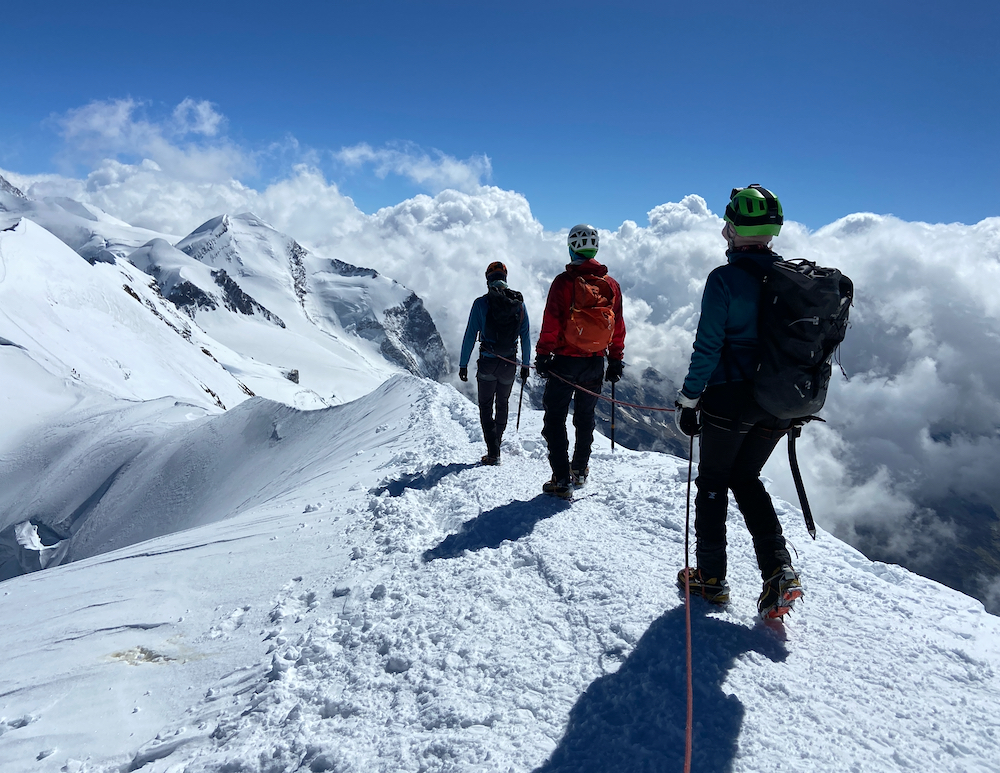 Another really enjoyable alpine day up high thanks to the incredibly efficient and impressively expensive lift from Zermatt to Kleine Matterhorn…CHF104 for 1 adult return trip and half that for the guide.  This time climbing the classic route on Pollux via it’s SW ridge.  There is still a good layer of snow tracking up the easy ground on the ridge meaning we kept crampons on for the whole ascent including the fun steeper walls with the fixed chains.

Both the glacier approach and upper snow crest were in good condition with plenty of fresh snow blowing around in stiff chilly winds higher up above around 3900m and especially near the Schwarztor and blasting over the summit ridges on Castor and Lyskamm.  Numerous teams also doing the half and full traverse of the Breithorn where snow conditions looked good albeit with still snowy rock sections to be done in crampons.

Lots of teams were climbing the normal route from the Ayas Hut on North West Face on Castor which looked good and snowy with much less exposed ice than at the end of last summer.

There were no visible tracks setting off on the traverse of Lyskamm but there was a good looking track heading over to the Naso shoulder on Liskamm with some icy sections but overall apparently decent conditions on the descent to the Gnifetti Hut.  The Matterhorn still looks pretty snowy, and the Dent Blanche, see photo below.  According to the Hornli Hut only 6 teams tried the climb today with only 1 team reaching the summit and 5 turning back.

Really good late summer snow conditions for an ascent of the Breithorn from Kleine Matterhorn this morning including the traverse of the Western summit via an excellent narrow snow ridge with a very good track right along the crest.  The snow from the weekend had settled down and many teams were making the ascent including some teams skiing back down the South Face with some nice turns.  There were also many skiers down on the pistes of the Testa Grigia area below Kleine Matterhorn.

The glacier seems pretty well filled in around the Breithorn and going over towards Pollux and Castor which also both had tracks on them as well as down to the Ayas Hut.  Gav and Andrew did a sterling job of the traverse of the Breithorn central and West via a still well snowy series of rock buttresses so the whole thing was done in crampons.   A good effort and great Matterhorn Training and acclimatisation.

The Matterhorn only lost a small amount of snow from below the Hornli Hut today but above it’s still well snowy.  Summit temperatures remain, cool at below -5C with similar for tomorrow and then much warmer on Friday so it will probably clear a fair bit more by the weekend but how much snow there will be left and down to what altitude on the Hornli Ridge remains to be seen!

The clouds cleared above Zermatt this morning to reveal an impressively plastered white Matterhorn.  The snow line was hundred metres or so below the Hornli Hut and not much melted during the day as the mountain seem to attract much of it’s own cloud and it wasn’t very warm in the shade.  The South Face of the Riffelhorn by contrast was bathed in pleasant late summer sun and we enjoyed some excellent rock climbing and Matterhorn Training on the classic 4b multi pitch route, ‘Egg’.

This route had some really enjoyable easy climbing in some great positions on fine rock…and even the superlatives felt like understatement to describe the views from the crag!!  The approach path is easily approached from Rotenboden on the Gornergrat railway but the path soon turns to scrambling, with various bolts and rivets for protection in places which were used in this mornings combination of muddy paths followed by polished rock!   But it’s pleasant to be in the sun and all the time absorbing the remarkable views of the Matterhorn, Monte Rosa, Lyskamm, Castor, Pollux above the huge Grenz Glacier.

Once the summit was reached even more expansive views of the Zermatt skyline can be enjoyed and plenty of fresh snow could be seen on the Weisshorn, Zinalrothorn, Obergabelhorn and Dent Blanche.

With the cooler temperatures and shorter days it feels like an early autumn climate although there is plenty of sunshine forecast for later in the week so hopefully it will clear for our Matterhorn teams over the weekend and early next week.

Andrew and Gav made their way safely over to the Ayas Hut and reported good conditions for the ascent of Pollux.

Despite all the Covid complications with quarantine and border crossings, we still have some group courses running and spaces available on UK Mont Blanc & Matterhorn Training weekendsUK Mont Blanc & Matterhorn Training Weekends in Sept and Oct and Chamonix mountaineering group courses running in September.  We also still have availability for private guiding based in Chamonix or the Swiss or Italian Alps over the rest of the summer season.  Please get in touch if we can help.